We value and celebrate holidays that imbibe the spirit of unity and, because of this, Pesach — celebrated on the 15th day of the Hebrew month of Nisan and taking place from April 5 to April 13 this year — has us excited for the values it imparts. Pesach is also known as Passover in many parts of the world. It is a testament to the perseverance and sheer determination in the face of tyranny and injustice of Moses and his followers. While Pesach, a Jewish holiday, does have its fair share of momentous elements, it is also a time for people to celebrate with their own small traditions. Many Jewish people have special cutlery and silverware that only gets taken out and used during the Passover days.

Pesach follows the Hebrew calendar, and it starts on Nisan 15. Due to this, each year, the holiday falls on a different day of the Gregorian calendar. The week-long observations are an affair of self-control and sacrifice by enjoying simple food items and paying tribute to resilience. Here, we ‘pass over’ some interesting historical facts.

The holiday’s story starts with Joseph moving to ancient Egypt after a severe famine occurs in Canaan. Joseph’s tribe was one of the 12 tribes of Israel. As the years passed, hostility between local Egyptians and the migrant Jews began simmering due to the latter’s growing numbers. These heightened tensions finally led to the enslavement of the Jews by the appointed pharaoh. The pharaoh also sanctioned the compulsory drowning of all firstborn sons of Jewish households.

Moses, who was a firstborn son saved from drowning, warned the pharaoh many times to mend his ways and release the enslaved Jews. However, the arrogant leader refused to bow down. As a result, God sent 10 plagues to Egypt, including hailstorms and causing the Nile to turn red. Moses and his fellow Jews remained safe from these afflictions. Later on, Moses led the Jewish people out of Egypt, only taking the essentials with them on the journey. Much of the Pesach traditions are practiced in remembrance of this occurrence.

When Moses and his people left Egypt, they took matzah as a means of nourishment. Other symbolic foods include ‘chrain’ (horseradish) and ‘charoset’ (a sweet mixture of fruits and nuts). While many Jews celebrate seven days of the holiday, many people of the Jewish diaspora also honor it by celebrating Pesach for eight days. The number of days depends on “Yom tov sheni shel galuyot,” which indicates an extra day of celebration for those outside of the Land of Israel.

Departure of Jews from Egypt

Moses and the rest of the Jews leave Egypt after having been set free by slave masters — their departure signals the welcome of a new Jewish tradition, Pesach.

The churches disagree over Pesach being a Christian holiday with the western arm persisting in its stance that the Jewish holiday was originally also celebrated by Jesus.

Complete Abolishment of Pesach by Christians

The Council of Nicaea decrees the nullification of Pesach and it is replaced by the celebration of the Holy Supper.

Wine on the Moon with Gene Carnan

The astronaut Gene Carnan marks the historical occasion of landing on the moon by shouting ‘Manischewitz,’ which is the name of a kosher-products company.

Why is it called Passover?

When the 10 plagues descended upon Egypt, every household suffered except for the Jewish ones. The Jewish households marked their doors with lamb’s blood to indicate to the avenging angels that they were Jews. Seeing this, God and angels passed over their houses, leaving them untouched.

Why is matzah, one of the most prominent Pesach food items, so important?

When the Jews fled from Egypt, they only took the most essential items with them, including matzah that is sustainable nourishment. Matzah cooks faster than normal bread as it contains no leavening agents. Moreover, it is much lighter and easier to carry in large quantities.

What should I bring to my Jewish friend’s house when invited for Pesach?

You can buy seasonal kosher products that commercial brands offer each year during Pesach. For example, Coca-Cola offers special Pesach bottles with yellow caps and Hebrew inscriptions on them.

How To Observe Pesach

5 Facts About Pesach Food That Will Blow Your Mind

Why We Love Pesach 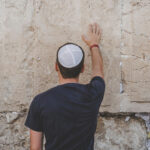