For many of us, riding a bicycle without training wheels is the first challenging physical activity we ever learn how to master. We all remember, don’t we? A running start. The protective hand secured to the bicycle seat is released. And then — ZOOM! — the child is off and peddling, and a lifetime of adventure and freedom awaits aboard a succession of beloved two-wheeled conveyances. In the spirit of that very first trip, let’s take a closer look at World Bicycle Day, June 3, shall we?

Training wheels or tandem, cycle your worries away on World Bicycle Day on June 3.

Getting your first bicycle and learning how to ride it is a rite of passage for almost all of us. Despite the marks and scabs from falling from our bicycles while learning, it is a memory we always cherish. Bicycling is quite a useful activity — in the hustle and bustle of today’s world, bicycling allows us to exercise our muscles, cut back on fuel consumption as it is quite a popular alternative to driving a car, and feel the wind in our hair. Really, there is nothing quite like the exhilaration of riding a bicycle. World Bicycle Day acknowledges this and the durability and longevity of the bicycle. Providing a simple and sustainable means of transportation, bicycling is rejuvenating for our physical- and mental health, and good for the economy, and the environment.

The United Nations established World Bicycle Day for many reasons. As basic as it is, the impact of the bicycle on society is quite transformative — even the poorest people get access to basic transport with the bicycle.

It all started when U.S.-based Professor Leszek Sibilski initiated a grassroots campaign with his sociology class to promote a U.N. resolution that would designate a day for the advocacy and celebration of the humble bicycle all over the world. In 2015, Sibilski dedicated himself to an academic project, exploring bicycles and their role in development. His project catapulted into a massive movement backed by ‘Sustainable Mobility for All,’ and eventually resulted in a dedicated international day set by the United Nations for the promotion of bicycling. On April 12, 2018, the resolution declaring June 3 as World Bicycle Day was unanimously adopted by all 193 member states of the UN General Assembly. The resolution was greatly supported by Turkmenistan and co-sponsored by around 56 countries.

A logo was also designed by Isaac Feld, with an accompanying animation created by Professor John E. Swanson, showing bicyclists riding on various types of bicycles around the world. The message here is that a simple contraption serves all of humanity and bridges the gap between people from different walks of life. The two designers also created the current blue and white logo for the cause.

Professor Sibilski publishes another blog post for the World Bank titled, 'Why is there no world day for the bicycle?'

Sibilski Appears at Scientists for Cycling

Sibilski speaks at the Scientists for Cycling colloquium in Taipei, Taiwan, and argues for a World Bicycle Day.

If you want to leave your bike unattended, it’s important to have a reliable bike lock. 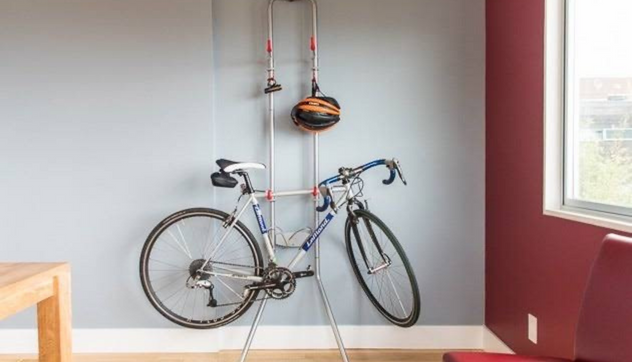 The Best Bike Rack for Apartment for 2023

Are you tight on storage space? Try these practical bike racks for small apartments

With these top-rated folding bikes, you won't have to worry about storage space or transportation.

The bicycle itself is a tradition. All of us have fond memories of riding through our neighborhood as children on our favorite bicycles with their add-ons like bells and baskets. Growing up, cycling has been a rite of passage, and its significance only increases with time. Whether it is a basic two-wheeler, a mountain bike, or one with training wheels, World Bicycle Day celebrates the exhilaration of cycling.

Bicycles that have been locked away are dusted off and taken out for a spin with friends and family. Many commute to work today on their bicycles, while others consider buying one as a daily mode of transportation.

12.4% – the percentage of all Americans who cycle on a regular basis.

35 seats – the number of seats on the longest tandem bike ever.

67 feet – the length of the longest tandem bike ever built.

$6.2 billion – the estimated size of the U.S. bicycle market.

2.5x – the production numbers by which bicycles are higher than for cars.

9 out of 10 – the number of people in Denmark who own a bicycle.

15 million – the number of bicycles discarded by owners every year.

18% – the percentage of bicycles imported by the UK.

What is the significance of World Bicycle Day?

The idea behind World Bicycle Day is to recognize the versatility and uniqueness of the bicycle, as well as its reliability and sustainability as a mode of transportation.

Is cycling better than running?

The number of calories burned in either exercise totally depends on the duration and intensity of the exercise. Cycling is gentler on the body and more targeted, so you can do it for longer than running, which uses more muscles.

What is National Bicycle Day?

World Bicycle Day on June 3 is the only holiday as of now for celebrating the joys of cycling.

5 Things You Didn't Know About Bicycles

Why We Love World Bicycle Day