Lightning Safety Awareness Week is observed every year in the third full week of June — June 18 to June 24 this year. An estimated 1,000 people get struck by lightning each year in the U.S. Lightning strikes cause several deaths and people who are struck by lighting often suffer from neurological issues. Thus, it is important to be aware of the dangers of lightning to keep yourself and your loved ones out of harm’s way in a thunderstorm.

The National Oceanic and Atmospheric Administration (NOAA) reports that lightning in the United States has killed more people than any other weather factor. Thus, Lightning Safety Awareness Week was started in 2001 to bring to light the gravity of the situation.

It is interesting to note that the fatalities caused by lightning in the U.S have dropped to around less than 30 a year. This can be attributed to the increased awareness of this phenomenon. Moreover, NOAA slogans like “When Thunder Roars, Go Indoors” or “See a Flash, Dash Inside” that were created for the blind, deaf, and hard of hearing have also helped in bringing the fatality rate down.

The Most Fatal Lightning Incident

NOAA lightning specialist John Jensenius is awarded the Department of Commerce Silver Medal for his contribution to lightning safety.

What are five safety tips for lightning?

There are some precautions you can take during a lightning event such as avoiding water during a thunderstorm as lightning can travel through plumbing. Additionally, it is important to stay away from all electronic items. If possible, avoid concrete floors and walls as well.

What is the lightning safety position?

If you’re outside during an electrical storm with no shelter close by, the best lightning safety position is to crouch into a ball with your hands over your ears, and head tucked in. Stay away from any body of water.

Is it dangerous to stand near a window during lightning?

Yes. Lightning is a dangerous force that can strike a house and release an electrical charge that can hit you, even through a window. 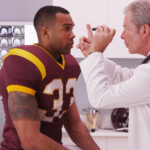