International Waffle Day on March 25 and celebrates waffles, their history, and a surprising religious holiday. A holiday that is best celebrated by eating waffles is our kind of holiday. Unsurprisingly the day has become a bit of a hit. It was originally celebrated in Sweden but now eager stomachs all over the world embrace International Waffle Day. Plug in your waffle maker and tuck into some mouth-watering treats.

Waffles came to Sweden near the early 1600s and quickly spread to nearby lands. They were often eaten with jams and fruits, establishing themselves as a beloved treat to be eaten at all times of the day. The event in celebration of them was called Våffeldagen which sounded remarkably close to the religious Vårfrudagen and the traditions merged.

As time passed a wider variety of waffles emerged. They became sweeter in the 1700s after more butter and sugar were added to the recipes. In 1839, the Belgian waffle was created much thicker than regular waffles and with deeper grids. The Belgian variation was more filling and held more jam and cream too.

International Waffle Day itself is the result of a mispronunciation that brought two holidays together. In Sweden, this Waffle Day is known as Våffeldagen, which sounded a lot like Vårfrudagen (Our Lady Day), a day that celebrated the Virgin Mary’s conception. Because of this lingual connection, it became customary for Swedish families to celebrate Vårfrudagen with waffles on Our Lady Day. That’s how International Waffle Day ended up being celebrated on March 25.

International Waffle Day is a worldwide sensation where people make or eat waffles and share their love on social media.

Waffles become sweeter and the Belgian waffle is created.

Waffles come to Sweden and the similar-sounding Våffeldagen and Vårfrudagen unites the two holidays.

Vårfrudagen celebrates the archangel Gabriel telling the Virgin Mary that she would be the mother of Jesus Christ.

Is there a waffle day?

How long until waffles expire?

Waffles that are properly stored can last 3-4 months.

Is there a National Waffle Day?

Yes, there is also a National Waffle Day on August 24.

How To Celebrate International Waffle Day

Why We Love International Waffle Day 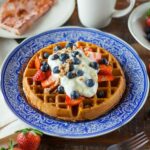