If anything gets us moving at National Today, it is food holidays, and National Lobster Newburg Day on March 25 has already got all of our mouths watering. Imagine that red golden lobster sitting upon a bed of rich cream infused with the goodness of eggs, the nutty scents of cayenne pepper and nutmeg, and a dash of sherry … absolutely delish, if you ask us! Some other versions of the recipe call for the addition of butter and/or cognac. But whatever the slight alterations may be, Lobster Newburg, in and of itself, is an iconic dish in the culinary world. One of the most interesting facts about this famous dish is that it wasn’t invented by a honed professional chef, but by a sea captain named Ben Wenburg.

As a sea captain, it was natural for Ben Wenburg to befriend the sea with all its secrets during his extensive travels. Seafood was also a major part of his diet, like many other seafarers’. These factors, combined with limited access to food items, led to Wenburg’s brilliant creation of Lobster Wenburg. Yes, you read that right. Lobster Newburg was originally called Lobster Wenburg.

Wenburg went on to recreate his dish in front of Charles Delmonico and Chef Charles Ranhofer, the former being the owner of New York-cafe, Delmonico’s. The chef and his team made little adjustments to the recipe before putting it up on the menu, naming it ‘Lobster a la Wenburg.’ Many of the cafe’s patrons loved the new menu addition so much that it became an instant hit. However, following an argument between Wenburg and Delmonico, the dish was sadly removed.

Yet, all was not lost at sea. After much persuasion and demand from the cafe’s customers, Delmonico brought the dish back, but this time named it ‘Lobster Newburg.’ The lobster dish once again took off bringing the business back to the cafe’s shores. It is to be noted that there is no set date for when exactly the first National Lobster Newburg Day was celebrated. People celebrate the day by indulging in the dish and reaping the benefits of the mighty lobster.

While at sea, Wenburg creates Lobster Newburg from scratch, using only the ingredients available aboard his ship.

After Wenburg’s successful demonstration of the dish, Delmonico instructs his staff to add Lobster Newburg to the cafe’s menu.

Lobster is considered a poor man’s food before it starts getting appreciation from those who are more economically well-off.

Delmonico’s chef, Charles Ranhofer, publishes the dish’s recipe for the first time, allowing the general public to gain access to it.

Would it be possible to tweak the recipe to suit my taste and still get the same results?

Of course, you can tweak the recipe and get the same results! But do be mindful of the key ingredients like heavy cream and sherry as these add the main flavors to the dish.

What’s the best time to have Lobster Newburg?

Any time, quite literally! Because of its light texture, it is not only served as an entree during lunch and dinner but also as one of the main dishes during breakfast.

Is a specific lobster required for Lobster Newburg?

5 Facts About The Lobster That Will Blow Your Mind 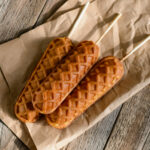