Maha Navami is celebrated in October, or sometimes November, depending on the lunar date in the Hindu calendar. In 2021, it falls on October 23. According to Hindu mythology, this was the day when the Goddess Durga slew Mahishasura, the ‘buffalo demon’. This festival is celebrated by millions of Hindus in India and all over the world as a symbolic triumph of good over evil.

Mahishasura was a demon with extraordinary powers. However, the Asuras (demons) always lost their battle against the Gods. Tired of constantly being defeated, Mahishasura pledged to change things. Sacrificing his sleep, food, and all comforts of life, he meditated on Brahma, the creator of the universe and all life for many years. He, with unwavering devotion and focus, prayed to Brahma.

Brahma was pleased. He appeared to Mahishasura and told him that he could ask for anything, and his wish would be granted. Mahishasura asked Brahma for a boon that would make him invincible. “Let no man or god be able to defeat me”, he said. In his arrogance, Mahishasura believed that no woman could ever defeat him. Brahma granted him the boon.

Then Mahishasura unleashed his reign of terror. Soon he captured the Earth. Next, he attacked the heavenly abode of Indira, the King of Gods, and captured it too. All the powerful weapons that the Gods hurled at him were futile. Mahishasura seemed to be invincible, and the Gods were helpless.

All eyes then turned towards Goddess Parvati. She immediately took the avatar of Durga. Durga had 10 hands, fierce eyes, and gold ornaments. She looked beautiful, and yet terrifying. Riding a lion, she charged into battle with Mahishasura.

Mahishasura was powerful and had the ability to shapeshift between the human and buffalo forms. Durga and Mahishasura fought for nine days. On day 10, Durga pierced Mahishasura’s heart with a spade and killed him.

Thus, Goddess Durga ended the terror brought upon heaven and earth, which had been almost toppled by Mahishasura.

Since then, the day is celebrated as Maha Navami and day 10 as Vijayadashami (meaning both ‘victory’ and ‘10th’), a victory of good over evil.

She is worshiped as a principal aspect of the mother goddess and is associated with protection, strength, motherhood, destruction, and wars.

The Saga is Written

The story of Durga slaying the demon Mahishasura starts emerging in texts and is found in the Sanskrit language.

Maha Navami is celebrated in West Bengal to mark the occasion of Durga slaying Mahishasura.

Why is Maha Navami celebrated?

Maha Navami celebrates the victory of good over evil because it is the day on which the goddess Durga killed the buffalo demon.

What is the day of Navami?

This is one of the main Hindu festivals and signifies the birth of truth, joy, and purity. It is celebrated on a different day each year and, in 2021, it was on April 21.

What do we do on Maha Navami?

Devotees wake up early and pray to the goddess Durga. Since it marks the end of a nine-day fast, special dishes are prepared with ingredients such as saffron. Dishes include paneer rolls and various sugary treats.

5 Facts About Goddess Durga That Will Blow Your Mind

Why We Love Maha Navami 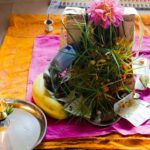