National Pralines Day is on June 24 that celebrates a nut-based creamy confection that can be enjoyed in an assortment of ways. Pralines are a smooth and sweet treat made with nuts, sugar, and sometimes cream. They can be used in cookies, candy, and as a paste and they’re often made with pecans or almonds. The name is believed to have been inspired by French sugar industrialist and French diplomat César, duc de Choiseul, comte du Plessis-Praslin who used a powder called pralin made by grinding sugar-coated nuts.

During the seventeenth century, France’s Marshal du Plessis-Praslin was responsible for the fame and name of the praline, but many believe that it was his chef, Clement Lassagne who was the true creator.

In one account, the idea for pralines came from Lassagne’s children who snacked on the leftover almonds and caramel from earlier culinary projects which inspired the idea. In another, the children had caramelized almonds over a candle and Lassagne followed the scent and discovered the magic of the mixture. And in yet another, Lassagne’s apprentice accidentally knocked a container of almonds into a vat of cooking caramel.

Pralines were brought over from France to New Orleans by Ursuline nuns in 1727. They oversaw young women called casket girls who, under the request of Bienville, were meant to marry New Orleans’ colonists. The casket girls were taught the art of praline making along with academics and domestic work for the purpose of becoming good wives to the settlers. Pralines became part of the local tradition in New Orleans, and now they’re an essential part of creole cuisine.

In the nineteenth century, the ingredients switched from almonds to pecans because of their availability in New Orleans, and cream was used to thicken the texture. Women in the French Quarter who sold pralines were called Pralinieres and selling pralines gave free people of color job opportunities when work was limited. Instead of being indentured servants or kept-women, women of lesser means were given more autonomy thanks to this alternate avenue of income. The praline expanded into other parts of the country and they became popular in Texas and Georgia as a favored southern confection, but it all began in The Big Easy.

Pralines haven’t changed much from their original form. The ingredients still consist of pecans, dairy, and sugar, and some have added vanilla and maple for more flavor. People have experimented with pralines in many different ways, but the original is still just as loved as it was back then. The creamy sweetness of this confection still holds its own amongst many other tasty treats.

Pralines are brought over from France by Ursuline nuns who used young women to create them as they were molded for marriage.

Free women of color were permitted to sell pralines as Pralinieres, offering them more economic security and better opportunity.

Pralines have remained very similar to their origins and are considered an essential part of southern culinary tradition.

What’s the definition of a praline?

Noun. A confection of nuts with caramelized sugar, used in desserts and as a filling for chocolates.

Where did pralines come from?

Praline may have originally been inspired in France by the cook of Marshal du Plessis-Praslin (1602–1675), with the word praline deriving from the name Praslin. Early pralines were whole almonds individually coated in caramelized sugar, as opposed to dark nougat, where a sheet of caramelized sugar covers many nuts.

The sugared praline pecans from Tanner’s Pecan and Candies are good snack foods also. There is a lot of sugar, but Pralines are a very healthy nut – full of protein and good fats that your body not only needs but craves.

How To Celebrate National Pralines Day

Why We Love National Pralines Day 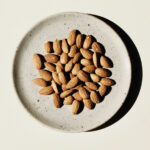