World Alzheimer’s Day is celebrated on September 21 each year. On this day, the world concentrates its efforts on creating awareness of Alzheimer’s disease. The disease is among the most prevalent forms of dementia; a set of disorders that disrupt mental function. World Alzheimer’s Day is the perfect opportunity for us to raise our voices and find new ways of fighting the disease’s effects.

Alzheimer’s is a form of dementia that affects memory and impairs daily function. It is responsible for somewhere between 60% and 80% of dementia cases. Alois Alzheimer, a German psychiatrist, was the first to identify the disease while treating a German woman in 1901. The disease was named after him.

The condition is often regarded as a family disease due to the impact it has on those closest to the victim. Alzheimer’s ranks among the leading causes of death in the United States. There are no prevention measures and it has no cure, even the progression of the disease cannot be slowed.

Founded in 1984, Alzheimer’s Disease International (ADI) is charged with supporting victims and conducting outreach to educate people and expedite related policies.
In 1994, ADI introduced World Alzheimer’s Day in Edinburgh during their annual conference on September 21 to mark their 10th anniversary. ADI coordinates World Alzheimer’s Day and World Alzheimer’s Month across the globe, working with member organizations and associations to organize events and create awareness.

The first ‘World Alzheimer Report’ was launched in 2009 on World Alzheimer’s Day and yearly reports have been issued every year since. Although the impact of the observance is spreading, the information gap and stigmatization concerning dementia remains an issue. Many people see the disease as a natural part of the aging process.

Granted, advancement in age is among the major causes of Alzheimer’s disease, but it isn’t completely an elderly disease. There are about 200,000 people under the age of 65 struggling with Alzheimer’s in the United States alone.

To mark this observance, concerned individuals and organizations can participate by creating awareness and reaching out to their nation’s Alzheimer’s association.

ADI launches World Alzheimer’s Day in Edinburgh at their annual conference on September 21.

Why purple for Alzheimer’s?

Purple is a combination of blue and red: incorporating the stability of the former and the passionate energy of the latter.

Is dementia different from Alzheimer’s?

Dementia refers to general mental decline that interferes with daily functions. Alzheimer’s is a form of dementia that is concerned with memory loss.

People with Alzheimer’s often suffer from visual impairment. Studies have shown that many struggle with color vision and problems with the retina.

How to Celebrate World Alzheimer's Day

5 Facts About Alzheimer's That Will Blow Your Mind

Why World Alzheimer's Day is Important 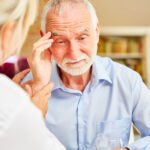