If you’re someone who skips their lunch break or eats at their desk, this one’s for you; come celebrate National Take Back the Lunch Break Day with us. Held on the third Friday in June each year, this event encourages workers all over America to step up to the plate — lunch plate that is, and take a regular and longer lunch break. Why is there a day like this? It’s because multiple research studies showed a trend of lesser and more infrequent lunch breaks across employees in America, resulting in lower employee morale and well-being. This day was set up as a reminder of the importance of the benefits of lunch breaks.

History of National Take Back the Lunch Break Day

Earlier, electricity was the major factor in deciding which meal was the most important. Dinner, which was eaten late in the morning after several hours of work, was the main meal during the Middle Ages. During the Seventeenth and Eighteenth centuries, this meal was gradually pushed back to the evening, creating a gap between breakfast and dinner. A small meal, called supper, was squeezed into this gap. Often a snack, this meal was also often presented as supper parties or luncheon parties and was usually reserved for the ladies. They would have lunch with one another when their husbands were out; this meal was light and usually consisted of left-overs from the previous night’s dinner. When the Prince of Wales stopped to eat a dainty luncheon with lady friends, he was laughed at! In the early eighteenth century, afternoon tea supplemented the luncheon. As industrialization increased, so too did the working hours. This disrupted the eating habits of rural work life. Originally, workers would carry their lunch from home, but as factories moved farther away, this too changed. Mass-produced food, stalls, and fast meals began to be set up near factories.

The lunchtime itself slowly began to see revolutionary changes; workers with long and fixed hours were given an hour off to eat lunch.

Soon, technological inventions like the punch card ensured every second of a worker was accounted for. This gradually reduced the ‘fast lunch’ trend.

The ‘quick lunch’ culture, however, is said to have originated in New York. With major manufacturing setups across this city, there were plenty of workers looking to eat meals, and they wanted them cheap and fast. Fast foods cropped up; there were drugstore lunch counters and Automats cropped up, followed by soda fountains, sliced wrapped bread, and spreadable peanut butter. A New York Times reporter reported even timed diners at a single quick-eating establishment in Times Square over a month. He found that the New York reputation of ‘gobbling food almost whole’ was true; one man finished in 48 seconds!

Eventually, people got tired of fast meals and began to get packed lunches. They would check out of work together, and shared lunches began to gain popularity.

Tork — a brand from global hygiene and health company Essity, commissioned a study four years ago. They found that while almost all workers consider a lunch break very important, more than half cannot find time to take a longer lunch break. Their research indicates employees who take a non-working lunch break score higher on a wide range of engagement metrics, including job satisfaction and productivity. This is why Tork created National Take Back the Lunch Break Day for workers across North America, to improve employee satisfaction and productivity by encouraging a lunch break.

The Word Lunch Begins To Be Used

According to the Oxford English Dictionary, the usage of the term lunch or luncheon to describe a meal that was eaten between more substantial meals started to be used at this time.

Supper gets pushed back to late in the evening, creating a gap between this meal and dinner; a light repast is used to fill in the gap.

The Growth Of Industrialization

A feature in Munsey’s Magazine reports that manual laborers in large groups would sit in doorways, against the walls, or even on the curb to have their lunch.

Take Back The Lunch Break

Essity brand Tork commissions a study across North America, to find out how many employees actually take their lunch breaks, and what common perceptions exist about these breaks in the minds of employees and employers.

We Have The Day!

When did luncheon become lunch?

The term ‘luncheon’ was first shortened to ‘lunch’ in 1829, but it does not catch on fully.

Can employees opt out of lunch breaks?

Do 8 hours of work include lunch?

Lunchtime is usually unpaid time. For example, in the U.S., if you are paid by the hour and your shift is eight hours long, then you are required to take a lunch break, but your employer is not required to pay you for this time.

How To Celebrate National Take Back the Lunch Break Day

Fun Facts About National Take Back The Lunch Break Day

Why We Love National Take Back the Lunch Break Day 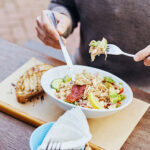