National Package Protection Day, celebrated on the Wednesday following Thanksgiving Day, which is December 1 this year, seeks to encourage consumers across the United States to become more mindful about the packages they order during the holiday season. The more people raise awareness about this day, the more people will prevent their packages from being stolen, delivered to the wrong address, or lost in transit. And any financial loss due to these mishaps would be prevented.

Ring LLC, a home security company that manufactures video doorbells, is the foremost promoter of this holiday, allowing users to detect outdoor motions, receive notifications when the doorbell is rung, among other security benefits. It is hoped that, with the sensitization this holiday brings, package theft will be reduced during the holiday sales.

Shoppers, knowing that e-commerce companies offer refunds for packages that either come defective or are not delivered at all, neglect to report incidents of theft to the police, hence leading to the rise of package thefts.

Daily, around 1.7 million parcels are either lost or stolen in the U.S., and this number increases during the holidays when people shop for gifts online.

Since 2019, several laws have been made against parcel theft all across the U.S.
Different states in the U.S. have different laws for parcel theft: In New York, for example, porch piracy falls under the Grand Larceny category, if the total value of the stolen parcel is more than $1,000. And in Texas, porch piracy isn’t considered a serious criminal offense and doesn’t involve jail time; It comes under Level Three Misdemeanor, and its punishment usually involves payment of a fine. In 2019, however, the HB 760 bill and the Defense Against Porch Pirates Act were passed, where package theft is considered a serious crime, with the possibility of a prison sentence.

In 2017, to protect the package of their customers, e-commerce giant Amazon began offering a service where deliverers could open the door of the recipient using a Digital Key. They also started a program where people could share theft videos with the police through security cameras.

Parcel theft is more common in countries where payments are made in advance and packages are left on the receiver’s doorstep. It is less common in European and Asian countries, where people prefer to pay after physically receiving the delivery of their order.

The term 'porch pirate' is used on Twitter for the first time.

The Day Becomes a National Holiday

The first National Package Protection Day is celebrated in the U.S.

What is porch pirating?

The term ‘porch piracy’ became popular around 2010. Theft of packages from the receiver’s residence is commonly known as porch piracy. Porch pirates usually steal packages of expensive items such as laptops, phones, and home appliances.

Is porch piracy a federal crime?

Current Law in the majority of U.S. states considers porch piracy a Level-Three Misdemeanor. Its punishment doesn’t involve imprisonment, and only a monetary penalty is imposed on the offender in most cases.

How common is porch piracy?

Porch piracy is a massive crime that mostly occurs during daylight hours.
Around 40% of porch piracy incidents in the U.S. occur in apartments and multifamily communities.

5 Facts About Online Shopping That Will Blow Your Mind 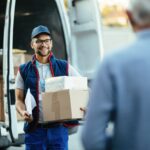 Prisoners for Peace Day
Restoration of Independence in Portugal