Seafood lovers across the nation rejoice on National French Fried Shrimp Day, December 21. The day is dedicated to, well, fried shrimp. This delicious dish is enjoyed by many, especially Americans. Shrimp is, not surprisingly, a seafood favorite among Americans as it is consumed more than any other seafood. French fried shrimp — no, it’s not French — is a recipe that simply refers to shrimp that has been deep-fried in fat, the same way thin strips of potatoes are deep-fried to make French fries. On National French Fried Shrimp Day, make sure to munch on this simple but crunchy American favorite!

Humans have been eating shrimp since they have been on Earth, according to archeological evidence. Several sources argue that Ancient Romans and Greeks, in particular, were extremely fond of shrimp, called Squilla, and preferred it to other variations of crustaceans. The food writer Marcus Gavius Apicius shed light on the shrimp situation during the fourth or fifth century AD in his compilation of culinary writings. According to this ancient cookbook, Greeks liked to cook large shrimp and wrap them in fig leaves, while the Romans roasted them and drizzled honey over the top.

While the origins of French fried shrimp are yet to be confirmed, what we do know is that shrimp has a long history in the culinary world. Americans have probably been eating it at home for centuries since it was widely available from Southern waters in early America. However, shrimp didn’t create waves in American cookbooks until after the Civil War in 1865 when it became available in cans. Shrimp salad — whole shrimp piled up on lettuce with a mayonnaise dressing — became a popular delicacy, especially among women.

Variations of shrimp dishes broke out countrywide after the shrimp salad became a hot item on the menu. Shrimp cocktails became a staple at bougie banquets during the early 20th century. The recipe was quite similar to that of the shrimp salad, but with an extra zing. Instead of mayonnaise, a cocktail sauce was added, which was similar to oyster sauce, mixed with extra lemon or vinegar. Horseradish, Tabasco, or Worcestershire sauce could also be used.

Fried shrimp is also thought to have first appeared on menus during the early 20th century, but the breaded version did not gain popularity until after World World II ended in 1945. This is due to pre-cooked frozen shrimp entering the market and appearing on grocery-store shelves. Shrimp dinners became available across the nation, even in drive-ins, because it was a relatively cheap meal.

Today, the shrimp’s popularity has grown even more, and is the average American’s favorite seafood. More than 650 million pounds of shrimp are harvested by the United States per year, and another 200 million is imported.

Shrimp With Honey, Anyone?

The Roman cookbook “Apicius” — believed to be attributed to Marcus Gavius Apicius, a Roman gourmet and lover of luxury — narrates Romans roasting shrimp and glazing it with honey.

Mechanical harvesting of shrimp begins and the shrimp cocktail, a staple in American cuisine, is invented around this time.

The breaded version of fried shrimp becomes popular after World War II ends, due to pre-cooked frozen shrimp becoming available on the market.

How do you make shrimp batter from scratch?

Beat egg and milk together, add 1/2 cup of flour and melted butter, stir well to blend. Mix another 1/2 cup of flour with salt, pepper, and Cajun seasoning. Dip the shrimp into the batter, then hold it up over the bowl, allowing it to drain well.

How long does shrimp take to fry?

Shrimp only takes two to three minutes to cook, depending on its size. Fry until it’s golden brown on the outside and opaque in the center. Stir-fry or sauté shrimp by preheating a pan over medium-high heat. Add butter, olive oil, or flavored cooking oil.

How do you keep fried shrimp crispy?

The best way to keep fried foods crispy is by simply placing them on a cooling rack set over a baking sheet. If you’re frying multiple batches, throw them into a low oven to keep warm as you continue frying extra food. 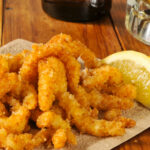