For New Englanders, an addiction to fried clams is a rite of passage, one that is celebrated every July 3 on National Fried Clam Day. Fried clams have been part of the New England coastal culture for more than a century. Fried clams are an acquired taste for some; for others, it is nothing short of love at first bite. Folks who live or summer along New England’s stunning Atlantic coast cannot imagine summer without the brush of a salty sea breeze on the cheek, and a basket of fried clams and a cold drink in hand.

It’s rare to know exactly who, when and where the first of anything was created or invented. Imitation is, after all, the sincerest form of flattery, and then everyone stakes a claim to the original invention. Fried clams are an exception, with a documented back story validating when freshly dug New England clams were first battered and deep-fried in a sleepy little New England coastal town.

Deep frying clams was a serendipitous brainchild of Lawrence Henry “Chubby” Woodman and his wife, Bessie. The couple began operating a small seaside stand in 1914, in Essex, Massachusetts, selling soft shell clams that Chubby dug himself and other goods to locals on the weekends. Business was slow the first two years, until July 3, 1916.

On that day, a local fisherman named Tarr was “shootin’ the breeze” with Chubby while enjoying a basket of Bessie’s delicious homemade potato chips. When Tarr asked Chubby how business was doing, Chubby quipped, “Business is slower than a couple of snails headed uphill.” Tarr wisecracked that maybe Bessie should deep fry some of Chubby’s freshly dug clams, heaped in a nearby bucket, the way she deep-fried potato chips. The two friends had a good laugh over the thought of deep-fried clams. But the idea intrigued the Woodmans, who talked about the idea of shucking and deep frying some of those clams that were in that bucket after Tarr left the store.

Chubby and Bessie reasoned If fried clams tasted good, they may have a way to increase the demand for their shucked clams and be more competitive. They agreed it was worth a try. Bessie heated fresh lard in the fry pot used to make her irresistible potato chips, and the two shucked clams and experimented with different batters all afternoon. They asked a few willing locals to be taste testers. By the end of the day, the verdict was in and it was an overwhelming “delicious.” That’s when Chubby and Bessie Woodman knew they were on to something big.

The next day, during the town’s annual Fourth of July parade, Chubby and Bessie introduced the citizens of Essex to the first fried clams. And just like that, a New England tradition was born. New England summers have never been the same since.

Bessie and Chubby Woodman introduce deep-fried clams in their hometown of Essex during the town’s annual Fourth of July parade.

Are fried clams good for you?

Clams themselves are quite nutritious, but fried clams do absorb whatever fats they are fried in, adding calories and carbohydrates depending on the type of oil and batter or breading used to prepare the clams.

What is the difference between whole belly clams and clam strips?

The clam belly is the soft round center of a soft-shell clam. The belly is the most tender part of the clam. A clam strip is a term used for the loose hanging piece under the belly. The belly and the strip are the parts of the clam typically eaten. There is another, less desirable part of the clam called the neck, which is the clam’s siphon. The neck is tough and chewy and considered inedible by many people.

Do clams have poop in them?

When you eat clams, you will ingest small waste particles left in the clam’s digestive system. So yes, clams contain what equates to “clam poop” and when you eat whole clams you consume this waste, sometimes less, sometimes more.

Why We Love The Woodman’s Fried Clam Story 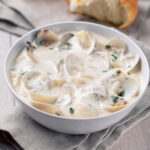