Cheers to all teddy bear lovers and owners! Let’s celebrate one of the best toys we’ve ever owned on National American Teddy Bear Day, on November 14. Teddy bears have been our comfort bed pals since our childhood. We give them names, hug them while we sleep and take them everywhere with us. These soft furry friends are a reminder of childhood. Teddy bears come in different sizes, colors, and materials and have been a popular toy choice since their creation in the early 20th century.

Do you remember the name of your teddy bear when you were young? Today, we celebrate them, whether you gave them away, stashed them in the attic or still sleep with them.

National American Teddy Bear Day cannot be traced, however, teddy bears can. The first stuffed bear was made by Margarete Steiff for her nephew after they visited a zoo in 1903. The bear toys were named Teddy Bears by Morris Michtom, after he was inspired by a caricature drawn of President Theodore Roosevelt refusing to shoot a bear on a hunting trip in Mississippi on November 14,1902. He sought permission to use his name for the bears and went on to make a lot of teddy bears. Since then, teddy bears have been a part of many childhoods.

Teddy bears were originally made with mohair fur. Mohair is obtained from goats, combed, woven, and trimmed to form a fur covering for the bears. Now, teddy bears are commonly made with velour, satin, denim, and synthetic fur.

Art pieces have been made featuring teddy bears. In 1907, a composer, John Walter Bratton, wrote an instrumental titled ”The Teddy Bears’ Picnic”. Lyrics were added later in 1932 by Jimmy Kennedy. A children’s book series based on bears was written by Seymore Eaton, an American educator. Teddy bears appeared on TV in the 1990s. There was Teddy Ruxpin, Super Ted, and Winnie the Pooh.

Teddy bears have emotional and mental effects on kids. The calming effects that teddy bears have on children led to the introduction of the Teddy Bear Corps program, where police officers, fire, and medical officials give a distressed child a teddy bear in a time of crisis.

Teddy bears are a symbol of love, care, and hugs. They are shared as gifts to show care and love, especially on birthdays and Valentine’s Day.

Stuffed bears are named ‘Teddy Bear’ by Morris Michtom after President Theodore Roosevelt who refused to shoot a bear during a hunting trip.

Teddy Gets a Wash

A Museum for Teddies?

What were teddy bears originally made with?

They were made with mohair and wool, which were totally unwashable.

What are the differences between the earlier stuffed bears and current ones?

While the teddy bears we have now are cuter and more cuddly, the older versions were made to look exactly like a real bear with extended snouts and round, shiny eyes.

How do I select a teddy bear for a child?

This depends on the age category of the child. The fur is important if you are gifting a baby or toddler; always go with short pile fur that they can’t bite off and swallow. Brown, blue, pink, and white are common colors for teddy bears for children. Go for washable bears with CE marks. 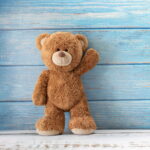 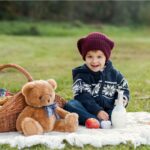