We celebrate Women’s Entrepreneurship Day on November 19 every year. About 85% of purchases and close to $20 trillion in global spending is credited to women. However, the workforce lacks women, and they earn only around 10% of the world’s income, due to the fact that women earn less than their male counterparts. Over the years, we have seen a rise in women entrepreneurs making headway and owning profitable businesses. Women’s Entrepreneurship Day recognizes this contribution and seeks to promote a more conducive environment for business women.

Wendy Diamond, a social entrepreneur and humanitarian, volunteered with the Adelante Foundation that provides microcredit to locally impoverished women in Honduras. This inspired her to start a movement that empowers women and alleviates poverty, thus creating the Women’s Entrepreneurship Day Organization (WEDO) in 2013 as a non-governmental, non-racial, non-gender, and non-political volunteer non-profit organization. She established WEDO to bring light to the plight of 250 million girls living in poverty worldwide and deserve a chance. It also seemed to empower 4 billion women living in this world. In 2014, the organization held its inaugural women’s entrepreneurship day in New York City at the United Nations.

WEDO empowers women and girls to become active participants in the economy by creating a network of women leaders, innovators, and entrepreneurs to initiate startups, drive economic expansion, and enhance communities. It also builds a community of like-minded individuals that women leaders can benefit from to make a real impact in this world.

New York Governor, Andrew Cuomo, New York City Mayor, Bill de Blasio, Philadelphia Mayor, Jim Kenney, and Los Angeles Mayor, Eric Garcetti, proclaimed November 19 an official day for women entrepreneurship. The United Nations also celebrates the day annually. Additionally, the U.S. House of Representatives recognizes the WEDO movement as “A Day in Honor of Women Entrepreneurs” under the leadership of Congresswoman Grace Meng. Women Entrepreneurship Day needs more support worldwide because if women receive fair and equal opportunities, they can make a greater impact in their country, boost the economy, and inspire others. And now, with a multitude of scholarships geared specifically towards women, women have even more opportunities to do so.

WED’s founder gets inspired to launch WEDO after volunteering in Honduras with the Adelante Foundation.

WED donates 1,000 microloans to impoverished women to empower them economically and help them start their businesses.

Women Entrepreneurship Day launches the initiative to inspire women and men to pledge their support to #ChooseWOMEN in business, politics, finance, art, etc.

Who was the first woman entrepreneur in the world?

Madame C.J. Walker, born Sarah Breedlove, is regarded as the original self-made woman. She was the daughter of former slaves and was orphaned at seven. However, she did not let that dampen her spirits and built her empire out of nothing.

Who is the richest female entrepreneur?

Diane Hendricks, the co-founder and chair of roofing supplier ABC Supply is worth $8 billion. Currently, she is the richest American self-made female billionaire.

Who are some of the most successful women entrepreneurs?

Some of the most successful women entrepreneurs in the world are Oprah Winfrey, Cher Wang, Indra Nooyi, Gina Rinehart, to name a few.

How To Observe Women’s Entrepreneurship Day

Why Women’s Entrepreneurship Day Is Important 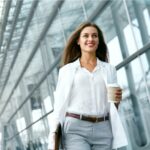