Titanic Remembrance Day is observed every year on April 15. Did you know that the R.M.S. Titanic ship had four hull compartments that could be flooded without causing a critical loss of buoyancy, and was, thus, considered unsinkable? The day is set aside to remember the victims and survivors of the unfortunate sinking of the ship and reflect on how the world jointly responded to a heartbreaking disaster.

The Titanic was designed by naval architect Thomas Andrews and constructed by the Belfast shipbuilders Harland and Wolff. Upon completion, it was thought to be the world’s fastest ship. It spanned 883 feet from stern to bow, and its hull was divided into 16 compartments that were presumed to be watertight. It was one of the largest and most luxurious ocean liners built during the time.

On April 10, it departed Southampton, England, on its maiden voyage across the Atlantic Ocean. However, just before midnight on April 14, it failed to divert its course from an iceberg and ruptured at least five of its hull compartments, causing water to fill them and ultimately leading to the sinking of the ship after it broke in half.

Because of a shortage of lifeboats and the lack of satisfactory emergency procedures, more than 1,500 people went down in the sinking ship or froze to death in the icy North Atlantic waters. Most of the 700 or so survivors were women and children. A number of notable American and British citizens died in the tragedy, including the noted British journalist William Thomas Stead and heirs to the Straus, Astor, and Guggenheim fortunes.

The survivors lost everything they had on board and were helped by the public and charities all over the world. Several Women’s relief committees helped women in providing clothes, and several private trains took up the duty of transporting the survivors to their close families, free of charge.

International convention for the safety of life at sea (SOLAS) is established to govern maritime safety.

Titanic in the Movies

"A Night to Remember," the first historically accurate film about the Titanic disaster is released.

The Location of Titanic’s Remains

A joint U.S.-French expedition locates the wreck of the Titanic lying on the ocean floor, at a depth of about 13,000 feet.

The Release of Titanic-based Film

The American epic romance and disaster film, “Titanic,” which incorporates both historical and fictionalized aspects based on the sinking of the R.M.S. Titanic, is released.

Who was the last person to leave the Titanic?

The last recorded survivor before the sinking of the R.M.S. Titanic was Eliza Gladys ‘Millvina’ Dean, a British civil servant and cartographer. At two months old, she was also the youngest passenger aboard.

How far down is the Titanic?

The ship, which fell to the seabed in two parts, can now be found 370 miles off the coast of Newfoundland at a depth of about 13,000 feet.

How much did people pay to go on the Titanic?

How to Observe Titanic Remembrance Day

5 Facts About The R.M.S. Titanic That Will Astonish You

Why Titanic Remembrance Day is Important 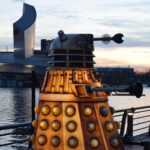