We honor the most commonly packed camping snack by celebrating National S’mores Day on August 10. Summertime is finally here and with it comes camping and gathering around the firepit in the great outdoors. Originating right here in the U.S.A., the s’more has us salivating in anticipation of smashing those tasty toasted marshmallows with a slab of chocolate between two graham crackers. Read on for the latest trends in s’more-making and try a new twist on an old favorite tonight.

While the origins of National S’mores Day remain unknown, s’more, the great American camping treat, has a long, delicious history. The first mention of such a treat was in the 1920s in a book of recipes published by Campfire Marshmallows, home of the original marshmallow and still in business today. At that time, the recipe was called a ‘Graham Cracker Sandwich’ and suggested the treat had already been made popular by the Boy- and Girl Scouts.

Later, in 1927, the Girl Scouts published a similar recipe in “Tramping and Trailing with the Girl Scouts” but they called it ‘some more.’ Finally, in the late ’30s to late ’50s, various recipes gave the name as we know it today, s’mores.

The ingredients for the original s’mores are: one marshmallow, milk chocolate squares, and two graham crackers. The traditional method for making s’mores is by a campfire and it’s hard to beat that experience. Part of the fun is each person searching for their own long, sturdy stick capable of holding a mound of marshmallows over the fire for toasting.

Whatever your preference on marshmallow toasted-ness, the end result is the same — huge smiles and full bellies. Enjoy your time today with family, friends, and the gooey goodness of s’mores!

Reverend Sylvester Graham (a minister who believed in avoiding processed wheat) invents the sweet whole wheat cracker named after him in 1829.

First Reference to ‘Some More’

The Girl Scouts publish “Tramping and Trailing with the Girl Scouts,” which includes a recipe for ‘some mores.’

To meet the demand for their new cookies, S’mores, the Girl Scouts select two manufacturers to make two different versions of their classic cookies.

How can you make s’mores healthy?

For a healthier version of this delicious treat, use dark chocolate, wholewheat graham crackers, and a sugar-free, fat-free, and no-carbs brand of marshmallows.

Is there really such a thing as s’mores beer?

Thankfully, yes! Several breweries around the U.S. offer this unique flavor. Check one of these out: Self S’more-antine by Perrin Brewing Company in Comstock Park, Michigan; Barrel Aged S’mores Stout by Octopi Brewing in Waunakee, Wisconsin; or Campfire Stout by High Water Brewing in Lodi, California. Definitely worth a road trip!

Is there anyone who hasn’t tried a s’more?

Yes, studies show about 13% of the U.S. population have only had a s’more over a campfire and 41% of people living in large, metro cities have never had a s’more. 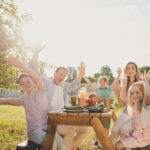