National Sing Out Day is on May 25 and we are prepping our vocal cords to celebrate this super fun holiday. It doesn’t matter whether you’re a professional, just a shower singer, or a pro at karaoke, this day is for everyone to sing loudly and let it all out. Pretend the world is your audience and put on a musical show for them. Most importantly, remember to just have fun.

History of National Sing Out Day

Steven Mithen claims in his book “The Singing Neanderthals” that humans actually started singing during the Neanderthal stage of evolution. The oldest known account of singing dates back to approximately the third millennium B.C. while the first-ever recorded song was recorded by a French printer and bookseller Édouard-Léon Scott de Martinville in 1860. He is also known to have invented the phonautograph in 1857, the earliest known device for recording sound.

The world has been blessed by fantastic singers over the years such as Elvis Presley who was dubbed as the King of Rock and Roll. He was in fact the highest-selling solo artist in history, surpassing sales of approximately 600 million units. He’s a cultural icon and a highly influential singer. We also have Michael Jackson who was dubbed as the King of Pop. His one album, “Thriller,” sold more than 65 million copies globally.

These cultural icons amongst others have inspired many people across the world to sing their hearts out, either just as a hobby or as a professional career. Singing has so many benefits. It’s actually a natural antidepressant and can help you destress and uplift your mood. Singing improves your confidence and gives some exercise to those vocal folds.

National Sing Out Day is celebrated every year on May 25 but the origins of this unofficial holiday remain unknown. However, that should not deter anybody from celebrating it with gusto. It doesn’t matter where and how you’re singing, as long as you’re singing something!

The Original Dixieland Jazz Band puts on the first-ever jazz concert at the Hippodrome venue in London.

MTV launches by broadcasting ‘Video Killed the Radio Star’ by The Buggles and changes the face of music.

Sales of CDs outperform vinyl sales for the first time.

Who are some of the greatest singers of all time?

The world has seen some remarkable singers over the years, notably Elvis Presley, John Lennon, Bob Dylan, and Beyoncé, to name a few.

How many different styles of singing are there?

There are so many different types of singing such as opera, classical, jazz, ghazal, pop, and rock, to name a few.

What are the different types of singing voices?

A singing voice varies from person to person based on their range. However, there are six common vocal ranges: bass, baritone, tenor, alto, mezzo-soprano, and soprano.

How To Celebrate National Sing Out Day

5 Fun Facts About Singing That Will Take You By Surprise

Why We Love National Sing Out Day 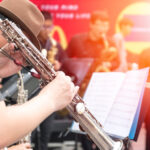