National Computer Security Day demands our attention every November 30 because cyber security affects everything from where we bank and how we spend our money to who we elect to public office. We certainly don’t want a replay of MyDoom, the worst email virus in history, which caused $38.5 billion in damage, so let’s get educated on staying safe online!

When is National Computer Security Day 2023?

The importance of computer security is highlighted on National Computer Security Day on November 30.

On November 2, 1988, Cornell University researchers uncovered an unknown virus lurking in their computer systems. Within four hours of discovery, the “Morris worm” virus invaded several other university systems as well as the ARPANET, an early version of today’s internet.

In 1988, the National Computer Security Day sprang out of the Washington, D.C., chapter of the Association for Computing Machinery’s (ACM) Special Interest Group on Security, Audit, and Control as a way to raise awareness about cyber crimes and viruses.  According to a 2004 “Networld” article, “November 30 was chosen for CSD so that attention on computer security would remain high during the holiday season – when people are typically more focused on the busy shopping season than thwarting security threats.”   By 2003, CERT and the U.S. Department of Homeland Security joined forces to create the National Cyber Awareness System.

Whether we’re talking about National Computer Security Day or  National Cybersecurity Awareness Month also in October,  the goals are essentially the same. Each person must be proactive to protect their online security. Use this month to find out all you can about common sense ways to stay safe in cyberspace.

In response to burgeoning threats of cyber attacks, a chapter of the Association for Computer Machinery (ACM) creates National Computer Security Day to raise public awareness every November 30.

The U.S. government steps up

The Computer Emergency Response Team (CERT) and the U.S. Department of Homeland Security work together to create the National Cyber Awareness System.

Cryptolocker released a form of malware which could not be removed without the victim paying a “ransom” which may or may not restore any lost files.

Computer Security By The Numbers

21% — the percentage of all files that are not protected in any way.

41% — the percentage of companies with over a thousand sensitive files left unprotected.

70% — the percentage of organizations that believe their security risk increased significantly in 2017.

69% — the percentage of organizations that don’t believe computer security threats can be blocked by anti-virus software.

50% — the percentage of security risk that stems from having multiple security vendors and products.

7 out of 10 — the number of organizations that say their security risk increased significantly in 2017.

65% — the percentage of companies that have over 500 users who are never prompted to change their passwords.

350% — the percentage growth of Ransomware attacks.

What is Cyber Security Awareness?

Cyber Security Awareness means taking a proactive approach to protecting your identity and your assets online.

What is Cyber Security Awareness Training?

How do you create a security awareness program?

By keeping the training brief and to the point, as well as suggesting things employees should do themselves to reduce human errors; you can create an effective program. 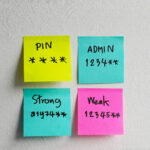