International Rabbit Day is celebrated on the fourth Saturday of September every year, falling on September 24 this year. Although we would love to celebrate bunnies every day, this day is especially observed to promote the care and protection of domestic and wild rabbits. The Rabbit Charity in the U.K. founded International Rabbit Day in 1998. The goal of this initiative is to ensure that rabbits that have been left unprotected or abandoned, find care and permanent shelters. Rabbits are prone to viral diseases and can become easy prey for a lot of animals. This day reminds us that there is more we can do for them.

Rabbits belong to the Leporidae family and their fossil records date back to 40 million years ago. Out of the 28 different species, the European rabbit is the most well-known. The species was initially found in the Iberian Peninsula and northwestern Africa and then showed up in western Europe about 2,000 years ago.

During the early 1950s, a viral disease called myxomatosis proved to be lethal to European rabbits and the initial wave wiped out 99% of the population in Australia. The remaining rabbits were able to develop immunity by the time the subsequent waves came.

In recent years, the rabbit population has been declining and this has resulted in a larger impact on our natural ecosystems as rabbits are a vital prey for other animals. In 1996, the International Union for Conservation of Nature, or IUCN, declared the Sumatran rabbit found in Southeast Asia to be a critically endangered species. There have been only two sightings of the species in the 21st century. The IUCN also placed the European rabbit species in the “Near Threatened” category in 2019, with a possibility of extinction.

There have been programs and initiatives taken up by charities and welfare bodies to protect rabbits. The Riverine Rabbit Programme is one such effort that was established in 2003, and they aimed to coordinate and oversee the conservation efforts towards the critically endangered Riverine rabbit, along with its habitat. In India, The Leporidae family (rabbits and hare) receive protection under the Wildlife Protection Act of 1972 because two of the existing species are endangered.

International Rabbit Day was founded in 1998 by The Rabbit Charity in the U.K., and it became a significant day to celebrate and spread awareness about rabbit protection and conservation.

The Oldest Record of Rabbit Fossils

Fossil records belonging to the Leporidae family, which include rabbits and hares are discovered.

The disease called myxomatosis proves to be lethal to the European rabbit species in Australia.

Rabbits in India are under the protection of this Act and hunting them for meat is banned.

The Sumatran rabbit of Southeast Asia is classified as an endangered species.

Initiative to oversee and delegate conservation efforts of the endangered riverine rabbit.

How long do rabbits need to exercise?

To stay healthy and active, rabbits must exercise for at least three hours every day and be let out of their cages to run and jump around.

The domesticated rabbit population in the world is approximately 709 million.

How To Celebrate International Rabbit Day

Why We Love International Rabbit Day 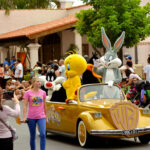 National Cook For Your Pets Day