Weary Willie Day is celebrated on December 9 every year in the U.S. as a recognition of the art of clowning, but with a twist. Weary Willie, as the name suggests, is a clown who wears his smile upside down and the day is a tribute to the character popularised by circus performer Emmett Kelly during the Great Depression of the 1930s.

Kelly, who created the Weary Willie character, was born in 1898 and started his career as a trapeze artist and cartoonist. When he started ‘clowning about’, he performed as the traditional white-faced, happy-go-lucky clown. He came upon the idea to create a contrasting, sad clown as early as the 1920s but it was difficult to sell management on his idea.

The Great Depression that began in the U.S. in 1929 saw an increase in the number of migrant workers forced to travel to earn a living. These workers, termed ‘hobos’, became the inspiration for Kelly to revisit his unpopular idea. Given the changed circumstances that had made his idea more acceptable and relevant, management finally gave the go-ahead and Weary Willie was born.

The character really captured the zeitgeist and became the most recognizable clown figure in the U.S. at the time. Weary Willie was not completely made up in white paint like other clowns and did not wear brightly-colored clothing. He looked more like an out-of-work tramp with an upside-down smile plastered on his painted mouth, and this made people feel better about themselves and uplifted their mood.

Emmett Kelly is born to an Irish railroad worker on December 9 in Sedan, Kansas.

The first alternative to the happy-faced clown bursts onto the scene this year.

Kelly rides the wave of his popularity to work in the Ringling Brothers & Barnum & Bailey Circus.

Inducted into the Hall of Fame

Kelly becomes the inaugural inductee into the International Clown Hall of Fame in Wisconsin.

There is no official record for this but it is celebrated on the birthday of its creator Kelly.

Can you only play a sad clown?

There are no hard and fast rules, and you can use the occasion to play whatever kind of clown floats your boat.

Is Weary Willie Day celebrated in other countries?

While both the character and performer are American in this case, many countries observe Clown Day in general.

How To Celebrate Weary Willie Day

Why We Love Weary Willie Day 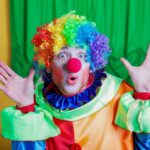