International Day of Veterinary Medicine is celebrated on December 9 every year. It recognizes the important work done by organizations such as the American Veterinary Medical Association (AVMA) whose vision and mission is to promote a strong and unified veterinary sector that can protect animal as well as human health and welfare.

The practice of taking care of animals and preventing and curing diseases that ail them goes back all the way to the Neolithic period, which contains the first recorded evidence of a cow that had undergone trepanation, or trephination – a type of skull surgery involving the drilling of holes to treat injury or pain. ‘Horse doctoring’ was one of the first organized veterinary professions to emerge in the Arabic world in the 9th century because of the economic and military significance of horses. The horseshoe makers, or farriers, of London were even encouraged by the Lord Mayor to form a ‘fellowship’ in 1356 to improve their practice of tending to horses.

Professionalisation efforts in France received a boost after the outbreak of rinderpest among cattle, and the first veterinary school was established in 1762 by Claude Bourgelat, who is now a legend in the field. Other societies linked to agriculture and industry also played a vital role in establishing the profession of veterinary care due to the overlapping interests between the fields. Britain got its first veterinary school in 1790 while America had to wait almost a century more for the first public veterinary college offering a four-year degree in Iowa State University.

According to the latest figures published by the American Veterinary Medical Association, there are 133,394 veterinarians in the U.S. and 309,144 veterinary doctors in Europe. The profession is only growing in global significance with the rise of zoonotic diseases that spread from animals to humans.

The “Papyrus of Kahun” from the 12th Dynasty of Egypt is known to be the first written record of veterinary medicine still in existence.

A Treatise on Horse Medicine

During the rule of Emperor Ashoka in India, a treatise titled “Shalihotra Samhita” records that “Everywhere King Piyadasi (Ashoka) made two kinds of medicine available, medicine for people, and medicine for animals”.

The First Veterinary School is Established

Rinderpest, or cattle plague, sweeps through Europe in the 18th century and gives Claude Bourgelat the opportunity to open the first veterinary school in Lyon, France.

Practitioners from seven states in the U.S. convenes to form The United States Veterinary Medical Association (USVMA), which becomes AVMA in 1898.

What are some of the trends in veterinary medicine?

Digitization has caught up with the sector as well. Ear tags and smart collars for livestock can monitor temperature, movement, and even catch early signs of disease by tracking their appetite. There are also sound diagnostic tools that can monitor respiratory illnesses and intelligent applications for prediction apart from advances in vaccine technology.

What are some of the latest advances in pet care?

Pet wearables can now monitor mood, track exercise, and diagnose disease. Similarly, telemedicine is making healthcare access easier for people with animals. There is also a growing interest in fruit, plant, and insect proteins and sustainability in the pet food sector.

What jobs can I get if I study veterinary sciences?

There are many options in the field. Apart from studying to be a medical professional, job roles encompass nutrition, physiotherapy, ecology, research, writing, and so on.

How To Observe International Day of Veterinary Medicine

Why International Day of Veterinary Medicine Is Important 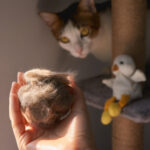