We get to indulge our sweet tooth on Sacher-Torte Day every year on December 5. The cake is famous worldwide for its taste, and this day is set aside to appreciate this culinary delight and how it has satisfied millions of people for hundreds of years. Tortes are similar to cakes, and many regard them as a cake variant. The difference lies in the ingredients — the torte incorporates several components that give it a tighter crumb and a heavier base than cake.

The Sacher-Torte ranks among the most celebrated culinary creations in Vienna. Sacher-Torte is a special kind of chocolate cake invented under equally special circumstances in 1832 by Austrian pastry chef, Franz Sacher, for the Austrian State Chancellor, Prince Clemens Lothar Wensel Metternich.

A huge fan of novel dishes, the Prince ordered the creation of a new cake. With the head chef out sick, the kitchen staff immediately went into panic mode. No one had any idea what to prepare — and then Franz Sacher had a culinary revelation. Despite being a 16-year-old, Sacher gathered his wits and the available ingredients, then set about to create what has since become a famous chocolate cake. The prodigy would go on to run several restaurants and cafes. The Sacher-Torte was by far his most notable creation; it established his genius and made him prosperous. In 1876, Franz Sacher’s son, Eduard Sacher, opened a luxury hotel in Vienna which bore the family name. The Sacher-Torte unsurprisingly became the staple of the Sacher Hotel. The hotel would rise in popularity under the management of Eduard’s wife, Anna Sacher. Famous for her love of cigars and dogs, Anna Sacher transformed the hotel into a hotspot for diplomats, aristocrats, and socialites.

Sacher-Torte Day was created to celebrate this amazing dessert and its unique origins. Food lovers worldwide can testify to the superb taste of what many call the best chocolate cake ever made. Longtime admirers and first-timers alike get to enjoy this yummy holiday every year as the holiday season looms. What a treat!

Eduard Sacher dies, and his wife, Anna, takes over the management of the hotel.

Anna Sacher dies in the same hotel she managed.

How long does a Sacher-Torte stay fresh?

The average shelf life of a Sacher-Torte is about seven days, and it’s the perfect dessert to add to your meals.

Is there alcohol in Sacher-Torte?

The Hotel Sacher has a variant, Sacher-Punschtorte, that contains alcohol. You can also add rum syrup in between the layers for the desired effect.

What is the best way to eat Sacher-Torte?

Sacher-Torte is usually served with whipped cream, and you are expected to moisten each bite of the cake by dipping it in the cream.

5 Facts About Sacher-Torte That Will Blow Your Mind

Why We Love Sacher-Torte Day 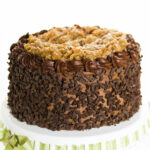