It’s time to enjoy a sweet treat this National Peach Melba Day on January 13! Made (and named) in honor of the famous opera singer Nellie Melba, this day invites everyone to try out this amazingly refreshing dessert. While the original recipe is a dish made from peaches, raspberry sauce, and vanilla ice cream, multiple recipes change up the ingredients to suit various tastes and create slightly different flavor combinations.

Peach Melba has graced restaurant menus for decades and is one of the most favored desserts globally. This creamy-and-cool dish was inspired by Helen “Nellie” Porter Mitchell, an Australian who went on to become a world-famous opera singer.

While learning under German mezzo-soprano Mathilde Marchesi, Mitchell was persuaded to take on a stage name — she chose ‘Nellie Melba’, with Melba derived from her hometown of Melbourne.

It was in London that she became acquainted with the famous French chef Auguste Escoffier. He was, in turn, known for his imaginative dishes and luxurious meals. Many of his dishes were named after the star patrons at his restaurants.

Melba often ate at Escoffier’s restaurants when she performed at Covent Garden. In 1892 (or 1893, depending on the source), Melba was to perform in Wagner’s opera “Lohengrin” at Covent Garden. She reportedly sent Escoffier tickets to this performance, which featured a boat in the shape of a swan. The next evening, Escoffier presented a dessert of fresh peaches served on a bed of vanilla ice cream and raspberry sauce and displayed it on an ice sculpture of a swan. Another version of events indicates this creation appeared at the Duke of Orléan’s dinner party, which he planned to celebrate Melba’s triumphant performance. Either way, this dish was the birth of our famous dessert.

Around eight years later, Escoffier revisited this dessert at the opening of the Ritz Carlton Hotel in London, where he was head chef. He created a new version of the peach melba, omitting the ice sculpture and topping the peaches with raspberry purée. He also renamed the dish Pêche Melba or Peach Melba.
At present, we might know everything about this dessert, but we are still researching the origins of the day itself.

Auguste Escoffier partners with César Ritz (of Ritz Carlton fame), making a name for himself as the head chef of restaurants located inside the Ritz hotels.

Our Dessert is Born

A New Version of Peach Melba

Another Claim on the Origin

‘Pijima’ was invented in a restaurant in Barcelona and Peach Melba is supposedly descended from this Catalan dish.

Escoffier publishes his autobiography, 'Souvenirs inédits (Memories of My Life),' and it contains the original recipe for Peach Melba, broken down into simple steps.

When was Peach Melba popular?

The mix of cool and warm, cream and fresh fruit, and the flavor of peaches made the dish very delicious. The addition of the name — attached to a major celebrity like Melba — took the dessert to new heights when it was created during the 1800s, and the craze continued well into the 20th century.

While the dessert was created to honor Australian opera singer Dame Nellie Melba, it is enjoyed everywhere around the world, particularly in the U.S., U.K., France, and Australia.

What is the Peach Melba flavor?

A peach melba tastes slightly like peaches and cream, with a hint of raspberry sauce. 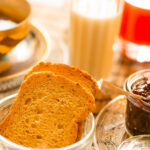 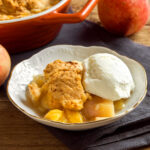 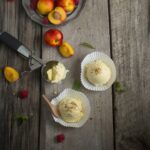