National Corned Beef and Cabbage Day celebrated on March 17 is dedicated to the simplicity of cured meat on a budget. The corned beef and cabbage combination was created decades ago by Irish immigrants. The meal has since become a flavorful favorite in the United States and other parts of the world as well.

The dish was created to fit the budget of Irish Americans who could not afford their homeland’s favorite pork and potatoes. The beef component was used to substitute for pork while the cabbage served as the vegetable replacement. The corned beef and cabbage combination is easy to make and is enjoyed with sour bread, wine or beer.

Ever imagined how Corned Beef and Cabbage came to exist?

Once upon a time, long ago, Irishmen immigrated to the U.S. They found simple jobs and earned little, which changed their lifestyle. When it came to food, naturally, they preferred to eat their native dishes like pork and potatoes before adapting to other food in the states.

Unfortunately, the price of food differed drastically. In their homeland, beef was always more expensive than pork, but it was quite the opposite in the U.S. After seeing Jewish immigrants replace bacon and pork with corned beef, the Irish did the same, commenting that the two were very similar.

Corned beef is made using the same salt curing method the Irish used to prepare pork. This is the main reason for their similar texture and taste. By now, you must be wondering, how did cabbage come into the pot? After moving to the U.S, the Irishmen had to be economical, so they removed some food staples from their platter, potato being one of them. Cabbage became the more affordable option. Thus, it took center stage next to corned beef.

The corned beef and cabbage dish is made by boiling corned beef, spices, cabbage, and other affordable vegetables together. The meal has become popular worldwide, with some restaurants even serving it as a starter or main.

National Corned Beef and Cabbage Day was adopted by Irish Americans on the same day as St. Patrick’s Day, making the day all about Ireland. The day is celebrated with Irish parades and eating frenzies where corned beef and cabbage are among the main dishes.

The import of cattle from Ireland is banned.

Boston celebrates the first St.Patrick Day in the U.S. with a parade.

The Men from Ireland

Irishmen immigrate to the U.S.

Corned beef and cabbage are served as a dish during President Lincoln's inauguration dinner.

Is National Corned Beef and Cabbage Day celebrated in Ireland?

No, it is not. Since Irishmen created the meal in the U.S., it is not native to Ireland.

Who created the dish?

The exact person is not known, but we are sure he was Irish.

Why do we eat Corned Beef and Cabbage on New Year's Day?

Eating this meal at the beginning of the year is believed to bring luck and fortune throughout the year. We are not sure how true that is, but what’s the harm in trying?

How to Celebrate National Corned Beef and Cabbage Day

Why We Love National Corned Beef and Cabbage Day 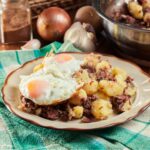