National Butterscotch Pudding Day is celebrated each year on September 19 in the United States. Although there are tons of puddings out there, butterscotch pudding remains one of the most loved. This milk-based dessert is prepared with starch, brown sugar, and butter. It is left to cool and set before consumption. Butterscotch could also have several other ingredients including corn syrup, lemon, salt, vanilla, and cream.

Created as far back as 1817, members of England’s Royal Family ate butterscotch candy as a dessert. Many believe the confectionery was invented by a man from Yorkshire, Doncaster — Samuel Parkinson. Records indicate that a recipe for butterscotch candy was included in a newspaper issue in 1848.

Although several theories lay claim to the creation of butterscotch, its origin remains elusive. One such theory claims that the name ‘scotch’ was used to denote the cutting or scoring of the candy into pieces before it hardens. Others believe that ‘scotch’ is a derivative of ‘scorched,’ and refers to the heating of sugar at high temperatures.

There is also the possibility of the confection being a product of the far north of Scotland — because the name ‘butterscotch’ cannot be dismissed either. This is another reason for the uncertainty behind the origin of this delicious confectionery.

The butterscotch pudding itself is just as much of a mystery as the confectionery that gives it its name. The origins of the custardy dessert continue to divide opinion. The creamy treat could very well have been created in the United States using the flavor created by the British. The first recipe for butterscotch pudding would include milk, butter, eggs, and brown sugar, giving it the delicious taste it’s well known for.

Today, we celebrate the deliciousness that is this tasty dessert. Join food lovers across the nation in celebrating this household name. If you have never tasted it, this is the ideal opportunity to start your love story. Find out for yourself why people love this sweet treat.

The Butterscotch Recipe Makes the Papers

The Doncaster Butterscotch recipe is included in a publication of “The Liverpool Mercury” newspaper.

F. K. Robinson’s 1855 publication “Glossary Of Yorkshire Words” describes the confectionery as a “treacle ball with an amalgamation of butter.”

Butterscotch candies are presented to England’s Queen Victoria and gain popularity as a result.

What is the difference between butterscotch and caramel?

Caramel is usually made from heating and melting white granulated sugar. Butterscotch, on the other hand, is made with brown sugar.

Butterscotch contains milk, which is rich in carbohydrates and calcium. There are several low-calorie versions of the pudding for you to enjoy.

Is there sugar-free butterscotch pudding?

Yes. Several brands sell sugar-free versions of butterscotch pudding. Ask at your local store or look up recipes that don’t include sugar.

5 Facts About Butterscotch Pudding That Will Blow Your Mind 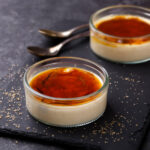