National Woman Road Warrior Day is celebrated on September 19 to honor the efforts of working women who fight against the odds to remain successful and influential. Truly, being a working lady and managing kids is not easy, especially if you have to travel a lot for work. However, it’s not impossible either. All that is required is the desire to make a difference and the motivation to achieve success. A woman road warrior travels because it is part of her job and she still meets deadlines no matter what the situation. Are you a woman road warrior? If yes, you better start celebrating!

Over the years, women have contributed a great deal to the advancement of businesses and workplaces in the world. For instance, in the 1850s, women were the ones who kickstarted the fields of home economics and social work. In the 1900s, things started to really change and numerous working women emerged at the forefront of the working world. For instance, women like Coco Chanel and Elizabeth Arden established their brands and became recognized as global influences. From 1940 to 1945, the percentage of working women rose by almost 10% since most of the men were off fighting in World War II. Though most of the businesses by women were home-based, they still managed to provide a good profit for them. An example of a woman who worked hard to make a mark is Mary Kay Ash, who went door to door selling books during World War II. In 1963, Mary Kay Ash formed her own business plan and later founded Beauty by Mary Kay.

In the late ’90s, more women joined the workforce or became entrepreneurs. This was the time when women like Madonna and Oprah Winfrey were establishing their business brands. They also became recognized across the globe. And yes, their line of work required a lot of travel. Furthermore, the number of women who are enrolled in MBA programs has also been increasing and, in 2016, 37% of full-time MBA students were female. Today, due to their education, a large number of women have taken up managerial roles that, at times, require a lot of traveling.

The One and Only

Katharine Graham becomes the only CEO of a Fortune 500 company.

What is female business travel?

What a woman should pack for a business trip?

For a business trip, it is recommended to pack formal clothing such as blazers, dresses, etc.

What are the travel essentials?

Some travel essentials include your passport, laptop, phone chargers, money, clothes, and shoes.

5 Fun Facts About Traveling For Business 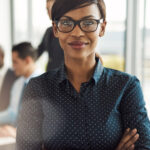