Makha Bucha falls on March 6, the full moon day of the third lunar month, and we are here to tell you how you can celebrate the day in the best possible way. Did you know that it has been more than 2,500 years since Siddharta attained enlightenment and became known as Buddha — The Enlightened One? Makha Bucha, also known as Magha Puja is observed to commemorate the meeting of Buddha and his first 1,200 disciples. Makha or Magha is the month, and Bucha or Puja means prayer. It is also called Saṅgha Day and Fourfold Assembly Day, and it is celebrated in parts of Thailand, Sri Lanka, Myanmar, and Cambodia.

The exact origins of the birth of Buddha are not known. There have been conflicting theories, some suggesting that he was born around 600 B.C. while others in parts of Japan and Korea suggest that he was born in 800 B.C. Buddha was born as Siddhartha in Lumbini, present-day Nepal, in an aristocratic family. When Siddharta was conceived his mother went to her father’s place in Kapilavastu. As a youth, Siddharta had the privileges of life. His father Suddhodana was the hereditary monarch of the Suryavansha (Solar Dynasty).

Later, when Siddharta stepped out of the kingdom, he faced the realities of life. He saw poverty, suffering, and death, which deeply moved him and gave him existential crisis. Siddharta decided to leave his kingdom and the pleasures of life and lead the life of an ascetic. And thus, Siddharata started meditating. It is during this time that he realized the importance of the Middle Path, that is, creating a balance between self-indulgence and severe asceticism. In Bodh Gaya, sitting under the Mahabodhi tree, Siddharta attained enlightenment and became known as Buddha — The Enlightened One.

Ten months after the enlightenment followed the events that led to Makha Bucha. The first 1,200 disciples of Buddha, who have attained enlightenment themselves, gathered to see Buddha without being summoned. It was also the full moon night of the third lunar month. This day came to be celebrated as Makha Bucha. It is said that it was also the day Buddha appointed Sāriputta and Moggallāna as his two main disciples.

Siddhartha is born in Lumbini to an aristocratic family.

Siddharta renounces the luxuries of life and steps out of his kingdom to live as an ascetic.

Buddha meets with his first 1,200 disciples and this day became known as Makha Bucha.

What activities are associated with Makha Bucha?

There are many activities and customs associated with Makha Bucha. On the morning of Makha Bucha, monks are offered food by the devotees. Later in the afternoon, they visit the temple for the sermon. The Five Precepts and The Eight Precepts are also observed.

What is the most important festival in Buddhism?

Vesak is the most important festival for Buddhists. It is the birthday of Buddha. It is celebrated in May, on the first full moon day.

What are the three main beliefs of Buddhism?

How To Observe Makha Bucha

5 Facts About Buddhism That Will Blow Your Mind

Why Makha Bucha Day is Important 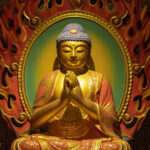 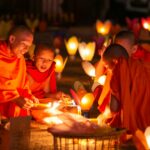 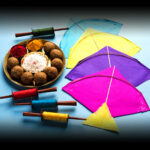 Cyprus Green Monday
Day of Memorial And Respect For Veterans

Day of the Dude
Dentist Day