Sinkie Day — or Dine Over Your Kitchen Sink Day — is the day after Thanksgiving, which is November 24 this year, and it is especially for those of us to whom leftovers taste much better when eaten over the sink. Imagine that after spending hours cleaning up the house, you want to give yourself a treat, a juicy or crunchy bite that will get crumbs everywhere. Taking it out of the kitchen may not be wise unless you love cleaning. One of the best places to eat that yummy but messy treat is over the sink. And some of us are natural sinkies; it’s just in us. Yes, sinkies are a thing. A ‘sinkie’ is someone who dines over the kitchen sink, grabs a quick bite in the car, drinks milk straight from the carton, or snacks right out of the refrigerator.

Sinkie Day was founded in 1991 by the International Association of People Who Dine Over the Kitchen Sink (IAPWDOTKS). The aim is to celebrate the tradition of saving precious time by eating while standing over the kitchen sink and donating revenues to charities that help combat world hunger. Norm Hankoff came up with the idea while chowing down some tuna salad over his kitchen sink using potato chips as a spoon. Hankoff’s idea enthralled him so much that he asked everyone around him to join. In March 1994, when Hillary Clinton was looking for an American chef, Hankoff sent a letter suggesting that the Clintons try this alternative dining style. He got a favorable reply letter from the White House, and Sinkie Day kicked off. The IAPWDOTKS motto is: “Everybody does it. Sinkies proudly admit it.”

Being a sinkie isn’t something to be ashamed of. The sinkie attitude is about de-stressing and having fun with food without worrying about the mess it’ll make. As a sinkie, you don’t have to go through the tiring routine of getting a table set and ready. It makes so much sense that Sinkie Day is a day after Thanksgiving because there are always leftovers of food, snacks, and desserts from Thanksgiving dinner. We understand how much work gets put into Thanksgiving Day, so we observe this holiday designated for snacking over the kitchen sink right after it. All we truly need is the kitchen sink to lean over and chow down while crumbs and food juices fall in the sink for effortless cleanup.

Sinkie Day coincides with Black Friday and the rush to get the best deals on items we’ve had our eyes on for months. In a rush, we may forget to eat or deliberately skip meals for later. Sinkie Day is the perfect excuse to indulge in thanksgiving leftovers or fresh treats. We don’t need to explain why we’re eating over the sink, or drinking out of the carton, on this particular day. The Day after Thanksgiving is for munching anything, anytime, anywhere, with no plate.

The International Association of People Who Dine Over the Kitchen Sink establishes Sinkie Day.

Norm Hankoff receives a letter from the White House approving the holiday.

What kind of kitchen sink is easiest to keep clean?

Porcelain and ceramic sinks are non-porous, and they have a high gloss finish that makes them resistant to stain. Compared to other sink options, they are easier to keep clean using everyday cleaning products.

Should I leave food in the sink?

While eating over the sink, once your food or snack falls into it, it is time to throw it away. Eating food that has touched the sink can cause food poisoning as even the cleanest sink may have some bacteria.

What do you eat when you're lazy?

Stir fry is always a winner when you don’t want to put too much effort into meal preparation. It is quick and easy to make and works well with leftovers as ingredients.

How To Celebrate Sinkie Day

5 Jaw-dropping Facts About Eating Over The Sink

Why We Love National Sinkie Day 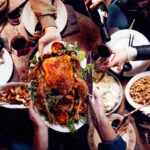