Kiss a Shark Week
AppreciationConservationEducational
Holiday search
Topics
Animal
Appreciation
Arts & Entertainment
Cause
Cultural
Federal
Food & Beverage
Fun
Health
Relationship
Religious
Special Interest
Log in Sign up
Celebrated the night before Thanksgiving, November 23 this year, DrinksGiving is the ultimate homecoming celebration. Local bars are packed as adults returning home for Thanksgiving weekend meet up with friends and family and catch up over drinks and laughter. It’s like a Springsteen song plays out in real life every year. Remember, drink responsibly and assign someone to be D.D. If you‘re driver is drinking…well...thank god for Lyft and Uber!

Drinksgiving may have an unofficial history but if you’re doing it right nothing gets recorded (or remembered for that matter). However, the history of alcohol is something we can talk about. The world’s oldest brewery was discovered in 2018 in a prehistoric burial site in a cave near Haifa in Israel. Researchers found residue of 13,000 year-old beer that they believe might have been used to honor the dead. The traces of wheat and barley based alcohol were found in stone mortars carved into the cave floor. It had originally been thought that beer making originated in Babylon 5000 years ago, however this new discovery precedes that by about 8000 years!

Evidence of alcoholic beverages has also been found dating from 5,400-5,000 BCE in Hajji, Firuz Tepe in Iran, 3000 BCE in Babylon, 2000 BCE in pre-Hispanic Mexico, and 1500 BCE in Sudan. According to Guinness, the earliest firm evidence of wine production dates back to 6000 BCE in Georgia. Wine was consumed in Classical Greece is breakfast or at symposia, and in the 1st century BCE it was part of the diet of most Roman citizens. Both the Greeks and Romans generally drank diluted wine, which varied between being one part wine and one part water to one part wine and four parts water.

The medicinal use of alcohol was mentioned in Sumerian and Egyptian texts dating back to about 2100 BCE. The Hebrew Bible recommends giving alcoholic drinks to those who are dying or depressed so that they can forget their misery.

In Europe during the Middle Ages, beer (of very low strength) was an everyday drink for all classes and ages of people. A document from the time mentions nuns having an allowance of six pints of ale each day. Cider and pomace wine were generally widely available — grape wine was the prerogative of the higher class.

This is all a long winded way of saying that grabbing some beers with your buds is about as ancient a tradition as there is. Cheers.

Vodka, though unknown to the US just a few years prior, became the popular white spirit of choice among American consumers.

America's most popular beer by sales

Corona, the popular Mexican lager, made its stateside debut.

How do you drink socially and not get drunk?

The best way to drink socially and not get drunk is to limit yourself to one or two drinks and nurse those drinks for the rest of the night.

What is considered an occasional drinker?

An occasional drinker is someone who has no more than 3 drinks on a night out and no more than 8 drinks a week.

Does drinking water sober you up?

Drinking water does not make you any less drunk, but it does decrease the effects of a hangover. Though there are lots of tips on sobering up, many of them are myths. The best thing to do is to drink a large glass of water and keep a refill next to your bed if you wake up in the middle of the night. Being hydrated will make you feel way better in the morning!

Why We Love DrinksGiving 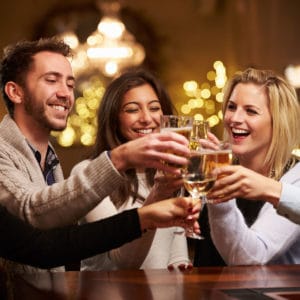 National Tie One On Day