National Yellow Bat Day is being celebrated on April 21. This day honors the activation of the 265th Army Security Agency Company (AirBorne) with the support of the 101st Airborne Division in Kentucky.

National Yellow Bat Day is commemorated every year on April 21. The Army Security Agency used to be an intelligence branch of the United States Army. It gathered intelligence, provided Army communication security, and carried out all the electronic countermeasure operations.

Later on, it merged with a part of the Army, which focused on military intelligence, to build the United States Army Intelligence and Security Command. The 265th Army Security Agency was one of the units of the ASA called Airborne. The 265th Army Security Agency was also part of the 101st Airborne Division. After being established, this Army was activated in Fort Campbell on April 21, 1967. During the Vietnam War, one of the advanced units of this division was deployed in Vietnam.

The symbol of the 265th ASA Company is a bat. When we searched for the reason behind them choosing a bat as a symbol, we found out that bats represent secrecy and mystery, therefore it is perfect for representing an agency that performs surveillance and provides intelligence support.

To be successful, the members of the unit should possess the qualities of a bat to follow their motto “Through the Night”. The contributions made by the 265th Radio Research Company (RRC) were not made public for decades since the services rendered by them were classified. Doug Bonnot, who was a member of the 265th RRC, declared National Yellow Bat Day in 2016.

The Army Security Agency provides intelligence and communications operations for the Army.

The last separate ASA field unit (the 523rd ASA, an Army Reserve unit based at Fort Snelling, MN) existed until mid to late 1987, when it was deactivated and reactivated as the 147th Military Intelligence Battalion (CEWI), another Army Reserve unit.

What does the National Security Agency do?

According to Britannica the “National Security Agency (NSA), [is a] U.S. intelligence agency within the Department of Defense that is responsible for cryptographic and communications intelligence and security.”

Where is Army intelligence stationed? 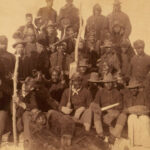