National Twilight Zone Day is on May 11 and we are celebrating with more science fiction, horror, supernatural drama, and unexpected twists than you could shake a fifth-dimensional stick at. Widely considered one of the greatest television shows of all time, “The Twilight Zone” has led to a number of spin-offs and derivatives, including graphic novels, movies, radio series, board games, and more. On May 11 we can dive into the show’s 60-year history and what it has meant to viewers and fans across the globe.

The 1950s had seen an explosion in science-fiction-themed television and radio shows. But perhaps none has had a greater impact on popular culture than “The Twilight Zone,” which debuted in 1959.

The series was created by a young writer named Rod Serling. It delved into several different genres, including science fiction, comedy, drama, and horror. Serling would often lean on his personal experiences in boxing, the military, and as an airplane pilot, as story ideas for the show. He also served as the narrator in each episode, acting as an almost omnipresent figure that was witnessing the events of the “Twilight Zone.”

After a five-year run, the show ended in 1964. It would remain dormant until 1983 when famed director Steven Spielberg helmed a movie adaptation of the original show. In 1985 it returned to television when CBS developed a reboot that would last for four years. Further reincarnations were developed in 2002 and 2019, following a similar structure to the original.

Over the years, “The Twilight Zone” inspired many science fiction shows and remains a fixture in modern pop culture to this day.

The first season of "The Twilight Zone" debuts on television.

"The Twilight Zone: The Movie" is released, starring Dan Aykroyd and John Lithgow.

After creator Rod Serling sells his share in the franchise to CBS years earlier, a television reboot is launched by CBS.

A New Generation of Fans

Actor, writer, and comedian Jordan Peele serves as host and executive producer of a new "The Twilight Zone" television show.

Why is May 11th Twilight Zone Day?

Just like the mysterious events of the show, we do not know why Twilight Zone Day is celebrated on May 11.

Why was the Twilight Zone canceled?

When the show was unable to find a sponsor, CBS executive James T. Aubrey canceled it, as he wasn’t a fan of it in the first place.

What is the scariest episode of the Twilight Zone?

“The Howling Man” is considered the scariest episode in “The Twilight Zone” series.

5 Facts About The Twilight Zone That Will Blow Your Mind

Why we love the Twilight Zone 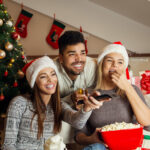