June 17 beckons you to celebrate the National Stewart’s Root Beer Day. Picture this: It’s a hot summer day with the sun beating down without mercy, but you have nothing to worry about as you have a cold pack of Stewart’s root beer to freshen you up. The frothy root beer, which the company sells in different flavors ranging from black cherry to orange and cream, is an old American favorite due to the nostalgia and the great taste attached to it. Stewart’s Fountain Classic also has a chain of restaurants in America.

The National Stewart’s Root Beer Day pays homage to Stewart’s Fountain Classics. The company was started in 1924 as a small business by the American teacher and entrepreneur, Frank Stewart. Stewart wanted an extra source of income for his household, and this prompted him to start selling root beers from a drive-thru. The company started by selling only the original flavor of root beer, but as the business expanded and became popular, more flavors were added to the cart. Today, you can enjoy a birch root beer, or cream and soda, or if you are in the mood for something fruity, you can treat yourself to a grape or a black cherry root beer. At the core of it, Stewart’s Fountain Classics are the material for old-fashioned American nostalgia.

Root beer’s origins lie with the indigenous tribes of America. Indigenous people created the beverage using the root bark obtained from sassafras trees. The tribes used root beer for medicinal purposes and general drinking. It was after the arrival of Europeans on American soil that root beer started being sold as a commercial drink. The fermented creamy drink was sold as a dry mix by the American pharmacist, Charles Elmer Hires. The dry mix would have to be mixed with sugar, yeast, and water before being left to ferment and froth for a fixed period. Hires’ friend Russell Conwell, suggested that Hires create a liquid formulation for the beverage as that would lead to a better marketing strategy. Conwell proved to be right because root beer sales increased drastically after Hires introduced the new liquid formula in the market. With the influence of many cultures and cuisines, root beer has garnered a host of versions. You can make your own root beer too with the basic ingredients and a combination of your favorite spices, sweets, and herbs.

A version of root beer, inspired by the sassafras root beer versions, is being sold at confectionery stores.

The bottling rights for Stewart’s Fountain Classics are given to Cable Car Beverage Corporation.

Stewart’s sells both alcoholic and non-alcoholic root beers. You can enjoy the same flavors you enjoyed in your childhood, but alcohol this time.

Do Stewart’s root beers have caffeine in them?

5 Facts About Root Beer That Will Blow Your Mind 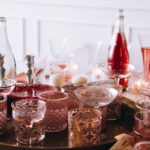