November 5 is National Redhead Day, and it’s every redhead’s chance to shine with each gorgeous strand of their hair. Redheads are often treated like the odd man (or woman) out, as they possess the rarest of hair colors. Plus, redheads are described as “fiery” and “hot-tempered.” If you have red hair, today is your day to be however way you want!

When is National Redhead Day 2022?

Get in the spotlight and celebrate your fiery locks on National Redhead Day on November 5. Started by two ginger haired sisters, the day aims to empower redheads to embrace and rock their lush red tresses!

Every November 5, National Redhead Day is also known as Love Your Red Hair Day in the United States, the United Kingdom and other parts of the world. Although the rest of us natural brunettes and blondes may throw a little shade (pun intended), people with red hair get this one day to celebrate their rarest of hair colors.

We have two redhead sisters to thank for coming up with Love Your Red Hair Day or National Redhead Day. In 2011, Adrienne and Stephanie Vendetti wanted people to be proud of their red hair in response to negative posts on a Kick a Ginger Day site. (The term, ‘ginger,’ is seen as a derogatory description of people with red hair.” As part of their slapback, the sisters created their website, ‘How To Be a Redhead,’ which eventually added Love Your Red Hair Day.

How to be a Redhead is as of now, the world’s only recognized brand dedicated to redheads. Since its inception in 2011, it has liberated redheads to look amazing and feel confident in their natural red locks.

A beauty book and monthly subscription box were also released under the brand of ‘How to be a Redhead’ in the same year. During a tour in 2015, the brand’s first monthly beauty subscription box titled ‘H2BAR Box’ was released- providing all things beauty and accessories specifically for redheads. On April 12, 2016, the sisters went on to publish their ‘How to be a Redhead’ book, which amazingly was the first ever breakthrough beauty book geared towards redheads. It premiered as #1 on Amazon and flew off shelves worldwide. Recently in September 2019, the fabulous team behind this name, expanded their subscription box range and now offer a Deluxe H2BAR Box.

So, what makes redheads so special? It’s all about genetics. If both your parents were born with the mutated MC1R gene on Chromosome 16, you’re probably a redhead. But, you can still be born with red hair even if neither of your parents has it. Even if one of your parents is a redhead, there’s one chance in two that their child may be red-haired. It’s also possible to be a natural redhead if you’re a black person or even, Chinese.

In historical folklore, redheads were often accused of being witches who “stole the fire of hell” and were later burned at the stake during the Spanish Inquisition. Additionally, red-haired people were seen as “unclean” nymphomaniacs. All of this, of course, is untrue but some of the stereotypes of redheads have lasted to this day. On National Redhead Day, rock your hair any way you like and hold your flame-colored head up proudly!

Actress Emma Stone brought redheads into a whole new light during her performance in the movie "La La Land." Red hair became a highly requested thing at salons after this movie came out.​

Co-founders of "How to Be a Redhead," Adrienne and Stephanie Vendetti started National Redhead Day.

The Red-Headed League is published

Two of today's three variants of redheads originated in West Asia 70,000 years ago. ​

National Redhead Day Around the World

Redheads Retreat! Here are some popular events and festivals from across the globe worth checking out!

We love how Redheads come together annually on this day to show off their manes of traffic stopping red hair in full glory! Whether it is long, curly, short, straight, doesn’t matter! It is all about red hair! Photos of these luxurious tresses grace our social media feeds, usually under the hashtag #LoveYourRedHairDay. These photos feature redheads rocking different hairstyles, parties thrown in honor of redheads in groups, or tributes paid to famous redhead starlets in Hollywood history. Movies featuring iconic redhead looks like that of Emma Stone or redhead celebrities like Molly Ringwald or Susan Sarandon to name a couple, are shown.

It’s widely believed (and there are studies to back it up) that people with red hair are more sensitive to pain. Medical experts and geneticists seem to think that the same MC1R recessive gene that causes red hair also makes redheads more liable to feel pain than other people.

Which colors should redheads avoid wearing?

Oranges and yellows are a fashion no-no for redheads while apricot and lavender look great on those with red hair.

Why We Love National Redhead Day 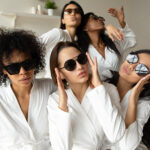 November 5 is National Redhead Day, and it’s every redhead’s…More