Every May 28, National Hamburger Day celebrates America’s most iconic food. Americans eat over 50 billion burgers a year, so it’s only fitting we set aside a whole day for these special sandwiches. Originating in Hamburg, Germany, the hamburger as we know it was developed in Seymour, Wisconsin, a town still famous for its hamburger heroics.

When is National Hamburger Day 2023?

The beloved hamburger gets its own day on National Hamburger Day on May 28.

Ah yes, the hamburger. A baked bun, beef patty, mustard, ketchup, onion, pickles, with optional cheese. Convenient, cheap, and delicious, the world-famous burger has a storied and uncertain history. No one is quite sure about the origins of the hamburger, other than that it is eponymously named for the town of Hamburg in Germany.

People have been eating cooked meat on bread for centuries, but the association with Hamburg seems to stem from a 1758 recipe for a dish called the “Hamburg Sausage.” Others think the name originates from a cruise company known as the Hamburg America Line, which served its passengers similar sandwiches in the Mid-1800s. To this day, there is little agreement over who actually created the iconic food.

Numerous deli and diner owners across the United States claim that their joint is responsible for inventing the burger. However, there seems to be some consensus amongst historians that the food as we know it today truly gained popularity at the 1904 World’s Fair in St. Louis, an event that also gave us the ice-cream cone. However it happened, the hamburger has grown to be one of the world’s most widely consumed food items, found on menus from Texas to Thailand. They can be had for a dollar apiece or made from gourmet ingredients that cost hundreds. However you decide to chow down, this day is for you. Fire up the grill, gather round your friends, and cook up some delicious burgers.

A Chicago Tribune article makes a reference to the growing popularity of the 'hamburger sandwich' amongst rail commuters.

King of the Castle

White castle becomes one of the first major hamburger chains, marketing their square burgers as 'sliders.'

In partnership with the Impossible Foods company, Burger King begins serving the Impossible Burger, made entirely from plants, at locations worldwide.

National Hamburger Day Around the World

They might not be National Hamburger Days, but countries around the world have their own national food holidays!

Ah, the hamburger. A juicy patty cooked to perfection, topped with your favorite add-ons and condiments, and wedged in a lightly toasted bun. And don’t forget the fries as a sideline. Grills are fired up, and family and friends gather for a barbecue cookout. Burger lovers all pitch in their tried-and-tested methods for making the ‘best burger’ and eat to their heart’s content.

Of course, the highlight of the day is the hamburger, so pretty much every eatery participates in putting forward their best burgers and offering great deals. Food marketing goes into overdrive as iconic burger franchises offer special burger editions for the holiday and bring back limited editions of great deals from the past. Many people get out of their comfort zone and try different burgers. There are so many types available to choose from — chicken burgers, buffalo burgers, veggie burgers, and the latest in recent years, the ‘Impossible Burger’ with a patty that isn’t made from meat at all!

We don’t acknowledge this often, but some of our best memories have been shared over burger meals — a first date, coupons and rewards at work by the boss, and discovering different sauces and spice blends for the perfect burger. These traditions are revisited or continued on National Hamburger Day.

1921 – the year when the oldest burger chain ‘White Castle’ was founded.

49 cents – the price at which the McDonald’s Big Mac was introduced.

40 billion – the estimated number of hamburgers consumed by Americans in a year.

$15,000 – the number of dollars offered by PETA once to the town of Hamburg, New York, to change their name to ‘Veggieburg.’

4 – the average number of hamburgers eaten by every American in a week.

1 nickel – the price at which White Castle’s first burger was sold.

60% – the percentage of all sandwiches sold in the world that are hamburgers.

2,014 pounds – the weight of the world’s biggest burger, at Black Bear Resort Casino in Minnesota.

10 feet – the diameter of the world’s biggest burger.

75 – the number of McDonald’s Big Macs sold every minute.

What if I’m vegetarian?

There are plenty of excellent veggie burger or garden burger recipes — check a cookbook or the internet and find your favorite!

Hamburgers don’t have to be the fatty, rich indulgences we know them as. Using thinner patties, more veggies, and grilling instead of frying your burgers helps keep things on the lighter side.

Every year, major chains including White Castle and Dairy Queen, run special promotions for the holiday. Check around at your favorite joints to see if you can catch a deal!

Why We Love National Hamburger Day 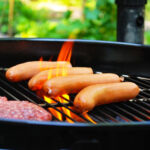