Even if you’ve never tried empanadas, there’s a good chance you’ve had one of their distant (and delicious) cousins. Originally from Galicia, Spain, empanadas now exist in over 30 countries in some shape or form. The name comes from “empanar”, which means “to bread” in Spanish and Portuguese. But some historians argue that the true meaning is “Can I have another?” That might not be a historical fact, but we can keep the spirit alive when National Empanada Day comes rolling in on April 8!

When is National Empanada Day 2023?

Spanish pastries are in the spotlight on National Empanada Day on April 8.

An empanada is a type of fried or baked pastry with Spanish origins. The name is derived from the Spanish term ‘empanar,’ which literally translates to ‘enbreaded,’ meaning coated in bread. The dough or bread used for making empanadas is stuffed with tasty fillings of meat, vegetables, and in some cultures, fruit. The dish is also popular in Latin American and southern European countries.

The exact origins of empanadas are linked to Portugal and Galicia (Spain.) The pastry made its first appearance during the Moorish invasions in Medieval Iberia. In 1520, a cookbook featuring Catalan, Arabian, French, and Italian food had seafood-filled empanadas listed as one of its recipes. It is widely believed that empanadas and its similar cousin, the calzone, are both inspired by samosas — a triangular-shaped pie popular in Arab and South Asian cultures.

In Portugal and Spain, empanadas are prepared by cutting a large pie into pieces, so that it can be enjoyed on the go. Portuguese and Galician empanada fillings include sardines, tuna, other types of seafood, and sometimes pork, in a sauce prepared from tomatoes and garlic.

The first evidence of an empanada dates back to Ancient Persia.

During the time of the Moorish invasions, empanadas start to appear in medieval Iberia.

The first recipe for empanadas is published in a Spanish cookbook in Catalan.

The Spanish present their recipe for the empanada to the Aztecs and Mayans.

What are empanadas traditionally filled with?

Empanadas are savory pastries with a dough shell filled with vegetables, tuna, cheese, chicken, beef, and tuna, either dry or mixed in a sauce. The final pastry is either fried or baked.

Are empanadas Mexican or Spanish?

What is the difference between an empanada and a samosa?

The main difference between empanadas and samosas is their shape. Empanadas are crescent-shaped while samosas are triangular-shaped.

Why We Love National Empanada Day 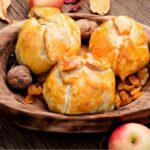 National All is Ours Day
National Empanada Day