We hope your sweet tooth is ready, because November 4 is National Candy Day. These sweet and sour treats have been our favorite snack since childhood. Whether they’re hard, chewy, fruit flavored, or a “melt in your mouth not in your hand” sort of treat, candy has been a consistent source of happiness and, as we get older, nostalgia.

The story of candy begins in India. Between the 6th and 4th centuries BC, the Persians and Greeks learned that the people in India had, what they called, reeds that make honey without bees. These reeds were actually sugarcane, which is indigenous to Southeast Asia. Ancient Indians would boil sugarcane juice, turning it into individual pieces of sugar, which they called “khanda.”

Before sugarcane was domesticated outside of Asia, honey was used in ancient China, the Middle East,  Egypt, Greece, and Rome to coat fruits and flowers, which would preserve them and turn them into a form of candy. Before the Industrial Revolution, candy was used as medicine to either calm the digestive system or cool the throat. In the Middle Ages, candy was mostly consumed by the wealthy and was made of sugar and spices to aid digestive problems, which were very common, as food was neither fresh nor balanced.

Candy first came to America in the 18th century from France and Britain. Very few colonists were skilled in sugar work, meaning only the wealthy were able to enjoy these new treats. In the 1830s, when the Industrial Revolution was in full swing, technological advances allowed candy to be accessible to more than just the rich, including a new market specifically for children. While some artisan sugar workers remained, candy stores were becoming an American staple, especially in the lives of children across the country. Penny candy became the first thing a child would spend their money on, and candy store owners relied mostly on the business of children and families to keep them running.

In a town in Yorkshire, England, Samuel Parkinson began making butterscotch as a hard candy.

David Bradley's candy store in New Jersey flooded due to a major storm, resulting in him calling his taffy "saltwater taffy."

M&M's were invented by Forrest Mars, who got the idea from soldiers eating chocolate pellets with a hard shell during the Spanish Civil War.

Starburst candies were invented in the UK by Peter Phillips.

Candy By The Numbers

65% — the percentage of the total candy produced that is consumed by Americans over the age of 18.

65% — the percentage of U.S. candy brands introduced more than 50 years ago.

36 million — the number of heart-shaped boxes of chocolate that are sold on Valentine’s Day.

1800s — the period when physicians commonly prescribed chocolate to patients with broken hearts.

2.8 billion pounds — the amount of chocolate consumed in the United States each year.

22 pounds — the average amount of candy consumed each year by Americans.

2 ounces — the amount of milk chocolate that is poisonous for a 10-lb puppy.

$7 billion — the amount spent on chocolate every year.

25 pounds — the amount of candy eaten per person per year in the United States.

2 — the number of Ms on M&Ms that stand for Mars and Murrie.

Which holiday has the highest candy sales?

Halloween pulls in the most candy sales over any other holiday, as people load up on bags of sweets to pass out to eager trick-or-treaters.

When is National Candy Month?

National Candy Month occurs in June to celebrate over 100 years of candy and the impact its had on all of our lives.

What is the most popular candy in the U.S?

Though the preferred candy tends to differ depending on the state, the two highest selling candies in the United States are M&M’s and Reese’s Peanut Butter Cups.

Why We Love National Candy Day 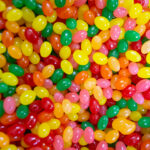 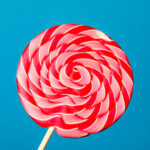