Election Day is observed on the first Tuesday after the first Monday in November, taking place on November 8 this year. This is the day we cast ballots to select public officials — from local to the national government. Presidential elections are held every four years, in years divisible by four, while the elections to the United States House of Representatives and the United States Senate are held every two years. Other state and local government elections can be held in any year that is designated by the state.

Elections are the one thing that separates a democracy from a dictatorship, giving people the right to control their leaders and oust them without the need for a revolution. This day is a great way to show our appreciation for these rights that have been granted to us through the notion of democracy.

The electors were chosen for the first U.S. presidential election on January 7, 1789. The Federal law permitted each state to choose Presidential electors any time within 34 days and send their electors to the Electoral College. As communications and transportation evolved, this became a problem since the states that voted earlier could influence states that voted later. To prevent this, Congress responded by mandating a uniform national date for choosing the electors.

The first Tuesday following the first Monday was chosen as Election Day for future presidents on January 23, 1845. This time was deemed suitable for elections as the harvest would have been over. Tuesday was convenient because voters could attend church on a Sunday and travel to their polling stations on Monday. This allowed the farmers to vote before Wednesday, which was usually when farmers would sell their produce at the market.

Women Get to Vote

In February 1870, the 15th Amendment grants African-American men the right to vote.

The 19th Amendment of the United States Constitution grants women from every state the right to vote.

The 26th Amendment reduces the voting age in the United States from 21 to 18 years.

Which U.S. president has received the most electoral votes?

What are the requirements to be president?

Who said, “Americans will go across an ocean to fight a war, but not across the street to vote”?

This line is credited to a 20th-century author and columnist William E. Vaughan. The full quote is “A citizen of America will cross the ocean to fight for democracy, but won’t cross the street to vote in a national election.”

How to Observe Election Day

Why Election Day is Important 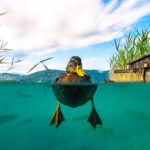