We love gifts that have a personal touch, and that’s why we love Make a Gift Day so much! Celebrated on December 3 each year, this unofficial holiday encourages people to create gifts for their loved ones, instead of relying on ready-made goods. This distinctive touch makes the gift all the more exclusive and adds more significance to the entire gift-giving process.

History of Make a Gift Day

Giving and receiving gifts is a tradition as old as time, or so it seems. Evidence shows even cavemen gave gifts like teeth or stones — to potential mates, to people who have done something good for the tribe, or to other loved ones.

Biologists believe the gifting practice is an evolutionary act to establish dominance and show affection. Our nearest relative in the animal kingdom, chimpanzees, are a great example of this. Males give females gifts of food to attract them.

Several older cultures had their gift-giving ceremonies special to the era and traditions. Native American cultures practiced a gift-giving feast called ‘potlatch’ for thousands of years. Our tradition of gifting on birthdays likely stems from the Ancient Egyptians, who honored their pharaohs with gifts like jewelry and various crops on their ‘birthdays’ (the pharaohs’ coronation day, which was more important than their day of birth). Egyptians took gift-giving one step further: they buried their dead with gifts to guide them peacefully into the afterlife. The Ancient Greeks, too, gave us a tradition: blowing out candles. They believed evil spirits would come to haunt a loved one on their birthday, so they lighted candles and blew them out, making a wish to the gods to protect the birthday girl or boy.

The Middle Ages saw almost everyone exchange gifts, with those of a romantic nature increasing in frequency. Another unusual gift during that age was the dowry given by a man to his new bride’s father, in exchange for his daughter’s hand in marriage.

By the 19th century, cheaper manufacturing costs meant mass-produced goods were easily available and affordable, as a result, gift-giving increased all over. Gift-giving has become commonplace in today’s world, with gifts being a popular means of showing love, affection, and respect across cultures.

We are still looking into the history, origin, and founder(s) of this day, but we believe it is set in December to take advantage of the holiday season when more gifts are given than at any other time of the year.

A Gift for an Animal Lover

King Manuel I of Portugal sends a white elephant named Hanno to Pope Leo X; The Pope loves the pachyderm so much he commissions Italian Renaissance genius Raphael to paint Hanno's portrait.

A Tribute to Love

Mughal Emperor Shah Jahan builds a mausoleum complex in Agra, India, in memory of and as a gift to his late wife Mumtaz Mahal.

The U.S. Receives a Gift

France gifts the U.S. a statue as a gesture of friendship; it arrives in 350 individual pieces packed in more than 200 cases and is finally assembled as the Statue of Liberty.

Donors from President Truman's home state, Missouri, pay for a two-lane bowling alley to be installed in the White House as a birthday gift; President Truman doesn't use it much, but his staff loves it.

A Diamond for a Star

Richard Burton buys his then-wife, Elizabeth Taylor, a 69.42-carat pear-shaped diamond; it is the first diamond to be publicly sold for seven figures.

What days do you get presents?

People typically get presents on major official holidays such as Valentine’s Day, Easter, Mother’s Day, Father’s Day, 4th of July, and Christmas. They might also receive presents on birthdays, anniversaries, and other special occasions.

How do you make a fun birthday present?

Ideas for fun birthday presents could be personalized and could include scavenger hunts, surprise trips, customized puzzles, food, or even clothes.

Should you give gifts?

Giving a gift is up to the giver and the receiver. Usually, gifting creates a bond between people, allowing us to communicate our feelings and appreciation.

How to Celebrate Make a Gift Day

5 Fun Facts About Gift Giving Around The World

Why We Love Make A Gift Day 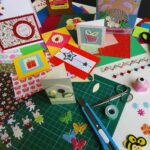 Coats and Toys for Kids Day