Rice Krispies Treat Day on September 18 is an unofficial holiday dedicated to the no-bake, quick to make yummy gooey sweet treats. Since the treat is so easy to make, it has become a staple favorite of millions of households in the U.S. that consume the treat on a daily basis. The treat gained so much popularity over the years that it was launched officially by brands across the world and sold at supermarkets. To celebrate the day, munch on some Rice Krispies and share your love for the delicious confectionery.

Rice Krispies Treats were first introduced in a dessert book that was written by Lucy Maltby in 1938. According to the recipe in the book, the treat was originally made from cereal, butter, sugar, molasses, and vinegar. In 1916, a similar recipe called Puffed Rice Brittle was introduced in another cookbook. The recipe then saw several amendments and additions over the years. For instance, the Campfire Girls troop leader Mildred Day and her scouts sold hundreds of Rice Krispies Treats during the summer of 1939. The credit for the sudden popularity of the treats lies in the fact that the scouts added a sweet flavor to the original concoction, and added campfire Girls Marshmallows to the mix. Later on, this very recipe was picked up by Kellogg’s since the sweet delight was loved by kids and adults alike.

In 1941, the company added Day’s recipe to the back of the Rice Krispies cereal box. The treat was also trademarked and became a nationwide hit due to its simple yet scrumptious flavor. A few years and lots of advertisements later, the treats became a common household name and were consumed by children of all ages daily, as well as on special occasions — that’s how much they adored the flavor. In fact, Malitta Jensen and Mildred Day, who were Kellogg’s employees, also introduced a promotional vehicle for the cereal in 1939. Holiday-themed Rice Krispie Treat versions were also created by people. These were created using food coloring based on the theme of the holiday.

Rice Krispies Treats are invented by Malitta Jensen and Mildred Day at the Kellogg Company.

Rice Krispies introduces a jingle sung by the Rolling Stones.

Kellogg's offers a breakfast cereal based on the confection.

Is there a National Rice Krispies Treats Day?

The treats aren’t fattening until mixed with specific ingredients, but they aren’t completely healthy either.

Is Rice Krispies high in carbs? 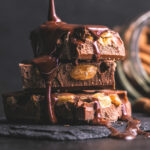