Indian Republic Day
CulturalHistorical
Holiday search
Topics
Animal
Appreciation
Arts & Entertainment
Cause
Cultural
Federal
Food & Beverage
Fun
Health
Relationship
Religious
Special Interest
Log in Sign up
National Cookie Day is December 4 so get ready to refill your cookie jar. Maybe you prefer your cookies to have a crunchy snap, or maybe you’d rather bite into soft and chewy sugary heaven. Either way, eating cookies brings us happiness, and we should all do it more often. Just don’t tell your doctor.

n America, a cookie is described as a thin, sweet, small cake. By definition, a cookie can be a variety of hand-held, flour-based sweet cakes, either crisp or soft. Each country has its own word for “cookie”. In England and Australia they’re referred to as biscuits, in Spain they’re galletas. Germans call them keks and in Italy they have several names to identify the various forms of cookie. In America, the Dutch word “koekje” was Anglicized to “cookie”. The sweet treat came to America through the Dutch in New Amsterdam in the late 1620s. The earliest reference to cookies in America is in 1703, when the Dutch in New York provided 800 cookies for a funeral.

Hard cookie-like wafers have existed for as long (and maybe even longer) as baking has been documented. However, they were not sweet enough to be considered cookies by modern standards. They appear to have some origins in 7th century CE Persia, shortly after the use of sugar became relatively common in the region. They spread to Europe through the Muslim conquest of Spain. By the 14 century, they were common in all levels of society throughout Europe, from royal cuisine to street vendors.

With global travel becoming widespread at that time, cookies made a natural travel snack, a modernized equivalent of the travel cakes consumed throughout history. One of the most popular early cookies, which traveled especially well and became known on every continent by similar names, was the jumble: a relatively hard cookie made largely from nuts, sweetener, and water.

Oreos, which were originally made as a knockoff of the first chocolate sandwich cookie called Hydrox, made its way to stores.

Ruth Wakefield, who ran the popular Toll House restaurant in Whitman, Massachusetts, brought the Toll House Chocolate Crunch Cookie into being, which is considered the first chocolate chip cookie.

There absolutely is! National Cookie Day occurs annually on December 4. No one can tell you that you’ve eaten too many cookies on this day…well they can. Eat responsibly, friends!

Quick! Check your calendar? Is today August 4? If it is, then phew! You’re in luck because it’s National Chocolate Chip Cookie Day! If not, then darn! You can still eat a chocolate chip cookie though!

Is there a National Candy Day?

We hope your sweet tooth is cavity free, because National Candy Day is celebrated annually on November 4! 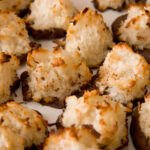