Global Fat Bike Day has taken place on the first Saturday of December annually since 2012 — this year it falls on December 4. It’s a special day for fat bike enthusiasts who celebrate it the best way they know how — riding on their fat bikes! The day falls on a Saturday, mostly since it’s a popular day for riding and allows people to go on longer rides. But this isn’t set in stone, so you can choose to ride on Friday or even Sunday, depending on your commitments. You and your fat bike have the entire weekend! All this day asks of you is to find the time to ride.

In just under a decade, Global Fat Bike Day has become a phenomenon. But who kickstarted this spectacular idea? The concept took off, not from one eureka moment but over a series of conversations and scattered rides. It began when a bunch of passionate fat bike enthusiasts in the U.K. started organizing a few rides. “Just grassroots stuff,” they called it. The dream was to gather amazing people and bikes in one place. Due to factors beyond their control (costs, conflicting schedules, etc.), the plan never took off.

At some point, the idea of a global gathering to celebrate old mountain bikes took shape. The premise was simple. Agree on a specific time and date, get on your bike, and ride – wherever you may be in the world. All you had to do was ride when the set hour rolled by in your respective time zone. Bikers could choose to ride solo or with friends, and they could hit an epic mountain trail or bike around the city. It was all good! Fat biking usually happens in areas where December is chilly, with perhaps a little snowfall. Snow on the trail always makes for a memorable ride, but you can also have a memorable ride on the sand.

Soon, the idea had takers across countries and spread like wildfire online. And here we are today. It remains an online holiday but has grown in scale over the years. A day that started in Britain has now gained popularity in Canada and the United States as well. It’s a way for the fat bike community to share experiences and celebrate their love for these splendid bikes.

The bikes have two to three wheels put together side by side to increase surface contact to the ground.

The modern fat bike design makes an appearance followed by an era of design experiments.

The Name ‘Fat Bike’ is Born

Mark Gronewald, a bike builder and frame designer in Alaska, coins the name ‘Fat Bike’ for his bike.

Fat biker enthusiasts worldwide take to their bikes and ride!

What are fat bikes?

A fat bike is a bicycle that has oversized tires. The bikes are designed specifically for off-road riding, particularly on terrains such as sand or snow.

Are fat bikes harder to ride?

Fat bikes are heavier than the standard mountain or road bike. Pedaling fat bikes on asphalt can be difficult due to their weight.

What are the advantages of fat bikes?

Compared to regular bicycles, fat bikes can travel effortlessly over rough terrain. Their wide tires have lower pressure and come with additional grip and traction.

5 Facts About Mountain Bikes That Will Blow Your Mind 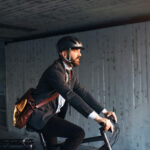