National Bible Week is the week of Thanksgiving Day, from November 20 to 26 this year. Christians in the U.S. spend this week honoring the Holy Bible and reciting hymns, prayers, proverbs, and prophecies of the great religious text. Brought into observance by former U.S. President Franklin D. Roosevelt in 1941, National Bible Week recognizes the non-believers and offers readings and guidance from the pages of the Bible. Starting from the Sunday preceding Thanksgiving, the church holds events to encourage reading, listening, and comprehending the basic teachings of the Bible. As the holy season transcends upon us, the penultimate month of the year is a great time to come together as a community and share our faith in the name of Jesus.

U.S. President Franklin D. Roosevelt commemorated the word of God by observing the first National Bible Week in 1941. Since then, every president has continued the tradition of celebrating the Holy Bible during Thanksgiving week.

The Bible is an incredibly detailed, long-preserved snapshot of an ancient culture and religion. For billions of people, the religious text offers hope, strength, and guidance to navigate difficult times. Leading a nation through its toughest days, President Roosevelt conceptualized the idea of a Bible Week to unite Americans with the stories of the Creator told through the virtue of strength and reconciliation.

The Bible, the ultimate bestseller, is central to the religion of Christianity, and the English translation has over 100 versions. National Bible Week celebrates the holy text in all its glory, bringing communities together to read their favorite verses and share personal interpretations with the world.

The first texts of the original Jewish Bible are written, some believe, by Moses.

The oldest manuscript of the New Testament is written on a papyrus fragment.

The New Testament is translated, for the very first time, to Latin.

German inventor Johannes Gutenberg introduces printing to the European world and produces the first printed version of the Bible.

The King James Version of the Bible is published after being commissioned in 1604.

Who brought Christianity to America?

Where should I start reading the Bible for the first time?

The Bible consists of 1,189 chapters. For your first reading, you can begin by understanding the scope and message of the Bible, and nothing compresses this theme better than the book of Genesis. However, it is not necessary to read the Bible from front to back.

How to Observe National Bible Week

5 Facts About The Origins Of The Bible

Why National Bible Week is Important 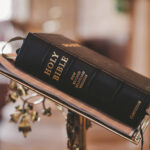 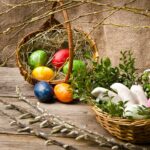 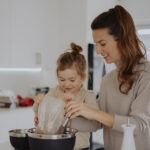