Traveling aids for the blind like canes, staff, and sticks have been around for a long time, but it was only in the 20th century that white canes came into existence and became a symbol used by the blind to alert others.

It is said that James Biggs, a photographer from Bristol, was the one who came up with the concept of white canes. In 1921, Biggs met with an accident, which resulted in blindness. The number of vehicles on the roads was rising during that period, so Biggs decided to paint his cane white in order to be easily visible to motorists, as well as other pedestrians.

In France, musician and writer Guilly d’Herbemont launched a scheme for the blind named the National White Stick Movement. She handed over white canes to many blind people throughout France, including WWI veterans. This was well-received in the United Kingdom as well. The United Kingdom proposed that blind people be given white canes and that it be universally recognized as an indicator that the person carrying it was blind.

In the United States, it was the Lions Clubs International that suggested the idea of giving white canes to the blind. For the war veterans, the long white canes not only acted as an identifier but also as a tool used for mobility.

On October 6, 1964, President Lyndon B. Johnson and the U.S. Congress signed a joint resolution and proclaimed that October 15 be celebrated as White Cane Safety Day every year.

James Biggs, a blind man from Bristol, paints his cane white so that he is more noticeable to motorists.

The Hoover Method is Developed

Richard E. Hoover at Valley Forge Army Hospital develops and teaches the ‘Hoover Method’ or the ‘Long Cane’ method to many blind citizens.

What does it mean when a white cane has a red tip?

If you see a person carrying a white cane that has a red tip it means that the person is deafblind — both deaf and blind. A completely white cane means visual impairment only.

Can white canes be taken on an airplane?

Yes. It is legal to carry a white cane on an airplane but only after it has been screened by the X-ray machine.

What are white canes made of?

To make the white canes lightweight and durable, materials like aluminum, fiberglass, or carbon fiber are used to manufacture them. 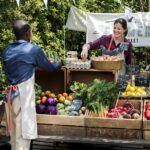