This November 10th is Sesame Street Day! Did you know that Sesame Street is the most widely viewed kids’ show in the world? Though initially meant to simply be fun and educational, the show has evolved into an international cultural phenomenon. Let’s use this day to spell out our love for this unforgettable program!

The seed of the idea that would become Sesame Street was first planted in talks between the television producer Joan Ganz Cooney and Lloyd Morrisett, the vice president of the Carnegie Foundation. During these conversations, Cooney spoke about her desire to leverage the ability of television shows to capture and keep children’s attention with the promotion of positive social values.

Following a period of extensive creative and scientific development, the show we all now know and love would begin to take shape. It was decided that Sesame Street would rely greatly on research processes in order to better inform various aspects of the program, spanning across the introduction of new characters, plotlines, and production design. This strategy would prove to be not only innovative, but wildly successful as well; Sesame Street would premiere on November 10th, 1969 as an immediate sensation.

The show would dominate the cultural terrain of children’s television in the ensuing decades. As its audience grew, so did its capacity and willingness to address increasingly complicated social, emotional, and ethical issues. Though not without some instances of controversy, Sesame Street has remained a pillar of constructive, educational programming with a unique ability to appeal to children and adults alike. However, as the general media landscape has experienced exponential growth in the 21st century, the show has in turn found itself faced with stiffer competition by other children’s television productions.

As a result, Sesame Street no longer commands the same authority as in past decades, and it has even faced its fair share of financial troubles. Still, it is hard to imagine a world where children (and grown-ups) everywhere don’t carry fond memories of days spent learning and laughing with the whole gang on Sesame Street.

The show premieres with its first episode.

Elmo is given his own segment - 'Elmo’s World.'

With 101 Emmy Awards, Sesame Street earns a place in the Guinness Book of World Records for the Most Emmy Wins by a Television Series.

What is the number at the beginning of Sesame Street?

Why was Sesame Street cancelled?

Sesame Street actually was not cancelled! Due to a lack of sufficient funding, though, it was forced to move networks from PBS to HBO in 2015 to ensure continued production.

The show was created by Joan Ganz Cooney; popular puppeteer Jim Henson, known for his work on The Muppets, was responsible for the creation of many of the show’s well-known characters.

How old is Elmo?

Since his debut in 1980, Elmo has managed to avoid aging beyond his mere three and a half years!

Why We Love Sesame Street Day 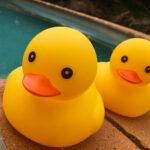