Strawberries have been traced back to the Roman Empire. Ancient Romans believed this fruit alleviated symptoms of melancholy, fainting, inflammation, fevers, throat infections, kidney stones, bad breath, attacks of gout, as well as diseases of the blood, liver, and spleen. However, food historians think the Greeks knew about strawberries even before this.

The fruit was also a symbol of wealth and luxury in Victorian England. As they were a perishable food, strawberries were only available in season, increasing their demand. After evolving into a luxury, they began to be served during afternoon tea among the wealthy.

History also tells the tale of how this fruit’s harvest and availability coincided with the Wimbledon tournaments, which is as much about strawberries and cream as it is about tennis. While we still don’t know exactly how this dessert became such an integral part of Wimbledon, some sources credit King George V as the one who introduced this delicious treat to the tennis tournament. Some believe the seasonality and popularity of these red berries played a part in it becoming Wimbledon’s snack of choice.

As for how this quintessentially British dish came to be, stories of its origin say Cardinal Thomas Wolsey, a close confidant to King Henry VIII, was the brains behind it. King Henry VIII’s court fed approximately 600 hungry lords and ladies twice a day. The chef there came up with the idea to pair sweet strawberries and clotted cream together in a dessert that did not require cooking, and voila, a delicious treat was born! Another version of this story says Cardinal Wolsey mixed these two ingredients at a royal banquet, and whatever the royals ate instantly became fashionable. It was even customary for newlyweds to eat strawberries and cream for their wedding breakfast!

The First Time this Dish was Served

According to rumor, strawberries and cream are first served together by Cardinal Thomas Wolsey at a banquet during Henry VIII's reign.

Its Popularity is Going Strong

What we now call the 'garden strawberry' is first cultivated in this period, in Brittany, France.

Offered at the First Wimbledon Tournament

200 spectators at Wimbledon court are offered strawberries and cream.

British retail company Tesco launches a strawberry and clotted cream sandwich, made of slices of berries between two cream-layered pieces of white poppy seed bread, with a dollop of strawberry jam — this is no longer on the market.

Is there a National Strawberry Day?

What months are strawberries in season?

As it is grown in varied locations around the world, strawberries are said to be in season from January to November.

A strawberry is actually a multiple fruit that is many tiny individual fruits embedded into one. Cultivated strawberries, which are hybrids of two parent species, can adapt to different weather and growth conditions.

National Strawberry Ice Cream Day is celebrated on January 15, to pay tribute to one of the choicest flavors of ice cream.

How To Celebrate National Strawberries and Cream Day

Why We Love National Strawberries and Cream Day 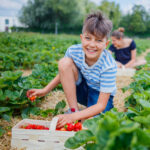