National Boston Cream Pie Day arrives on October 23. If you’ve never heard of Boston cream pie before, it’s a yellow butter cake, filled with custard or cream and topped with chocolate glaze. (Yum!) Now, we know what you’re thinking: Why is it called a pie, when it’s actually a cake?

Well, when the Boston cream pie was first invented, cakes and pies were baked with the same kinds of pans, and even the words were used interchangeably. As a result, the Boston cream pie kept its old-fashioned name, in addition to its delicious flavor. It was first invented in 1856, by an Armenian-French chef named Sanzian. At the time, chocolate frosting was a fairly new idea, so the delicious dessert took the world by storm. And to this day, it remains a popular menu selection. It’s even the official dessert of Massachusetts! So get your fork at the ready—let’s eat!
Back then the dish consisted of French butter sponge cake filled with thick custard and brushed with a rum syrup. The same custard overlaid with toasted sliced almonds coated the sides, while chocolate fondant topped it all off. While other custard cakes may have existed at that time, baking chocolate as a coating was a new process, making it unique and a popular choice on the menu.
According to the website, What’s Cooking America,: “Cooks in New England and Pennsylvania Dutch regions were known for their cakes and pies and the dividing line between them was very thin.  This cake was probably called a pie because in the mid-19th century, pie tins were more common than cake pans.  The first versions might have been baked in pie tins. Boston Cream Pie is a remake of the early American”Pudding-cake pie.”

Massachusetts names the Boston cream pie as the official “state dessert.”  A civics class from Norton High School sponsored the bill. The pie beat out other candidates, including the toll- house cookie and Indian pudding.

Is Boston cream pie a cake?

Why, yes. It’s a yellow butter cake, filled with custard or cream and topped with chocolate glaze.

Why do we refer to Boston cream pie as pie?

This cake was probably called a pie because in the mid-19th century, pie tins were more common than cake pans.  The first versions might have been baked in pie tins.

What are Boston’s other signature foods? 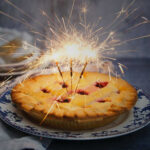