Pfeffernusse, also known as ‘pepernoten’ or peppernuts, originated from Central Europe. A confectioner from Offenbach am Main, named Johann Fleischmann, is believed to have created the recipe in 1753. Since then, the cookie became very popular, attracting the interest of so many people, including renowned individuals like Felix Mendelssohn.

Germany, Denmark, and the Netherlands are the countries most popularly known for this delicacy. In North America, the ethnic Mennonites are also very fond of pfeffernusse. Today, the recipe is widely available and the cookie is widely consumed around the world. However, pfeffernusse is traditionally reserved for the holiday period, around December. This is in keeping with the tradition of its origins, as the cookie has been associated with the celebration of Saint Nicholas Day and Christmas.

The traditional recipe consists of nutmeg, cinnamon, cloves, ginger, black pepper, mace, anise, sugar, butter, eggs, and flour. Popular nuts such as walnuts and almonds are also used to give the cookie some flavor. Leavening agents are applied to the mixture, kneaded, and then baked. They usually come out hard from the oven but would soften after a few days. Also, they are tiny and are sometimes shaped like nuts, which is probably why they are called peppernuts. Nowadays, bakers make alterations to this recipe to include some other ingredients or remove some existing ones. While they generally have a spicy taste, you can easily adjust the amount of spice you’d want. On National Pfeffernusse Day, homemade peppernuts are made available for the family and guests.

Mennonites Bring the Recipe to the U.S.

The German Mennonites settle in Northern America, bringing along the Pfeffernuss recipe.

Jacob Ludwig Karl Grimm and Wilhelm Carl Grimm warn their sister not to eat too much of it.

Becomes Popular During the Christmas Season

Pfeffernusse become a holiday treat during the feast of Sinterklaas and Christmas.

Where can I purchase already baked Pfeffernusse?

Understandably, you might not have time to bake your batch, but don’t worry, some bakeries deliver to your doorstep.

Though pfeffernusse are traditionally spicy, you can reduce the amount of spice to conform with your desire.

We thought you might ask that! It is pronounced “fer – fer – noos.”

How To Celebrate National Pfeffernusse Day

Why We Love National Pfeffernusse Day 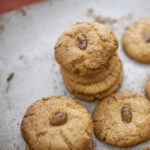