There is nothing more terrifying than old moldy food in the fridge, and that is why Haunted Refrigerator Night on October 30 is such a great holiday, a night for ghostly occurrences and hauntings. This night fits right into the spirit of the Halloween festival, which is the next day. October 30 is also Mischief Night, Cabbage Night, or the Night of the Devil, and is a fun way to remove the lurking dangers lying in wait at the back of your fridge.

The tradition of storing food in cold places has been around for a long time, since the ancient Persians. Historians believe they were the first to use cold storage for food, although the ice was harvested for various purposes since 1000 B.C. Societies like the Greeks, Romans, and Hebrews, also stored snow in insulated materials to keep their food cool, according to various sources. Back then, ice harvesting was the only way to ‘refrigerate’ food. People would preserve ice collected during the winter season in cold stores to use in the summer. By the 19th century, this method was replaced by the use of iceboxes that were usually made of wood and had a large block of ice inside to keep things chilly. The icebox is commonly called the early precursor to the refrigerator.

Then came Frederic Tudor. This American businessman and founder of the Tudor Ice Company realized that he could easily ship ice from the ponds of Massachusetts to the Caribbean. Years later, he was shipping ice practically everywhere, from the Caribbean to Europe, to India, and even Hong Kong. His contributions to the ice trade earned him the moniker of ‘Ice King’ in Boston. He showed the hotter tropical countries just how much they needed ice, and by the 1930s, ice was a mass-market commodity all over the world. However, because it was difficult to harvest ice— and dangerous too, as people had to extract it from frozen ponds — multiple people tried to invent artificial means of refrigeration. The first person with relative success at this endeavor was Scottish professor William Cullen, who designed a small refrigerating machine in 1755. But, the amount of ice generated from this machine was too little for the invention to be considered practical. Over the next decade, multiple inventors would similarly try their hand at inventing refrigerating devices, and many of these earlier inventions made it to the consumer market as well. Over time, the design became more streamlined, the engines more eco-friendly, and the storage spaces larger. So much so that we can now store food for a long time until they barely resemble what they once were.

The 21st century has left us spoilt for choice in terms of food storage options. We have various designs, models, sizes, and functionalities. This may be the reason why we sometimes cannot find leftovers in the vast depths of our chilly caverns. This also may be why American actor Thomas Roy and his wife decided to create Haunted Refrigerator Night as a special holiday. And what better time to tackle the scary mess that is your refrigerator than the night before Halloween? According to these perennial holiday creators — they have created more than 75 holidays in all(!) — they had a tradition of cleaning out the horrors in their fridge right before Halloween each year, and the idea sprung from this. Whatever their reason, we are glad to get a little push to clean out our refrigerators.

The Yakhchal System is Invented

Ancient Persians invent a system to make ice in winter and store it through the summer — in a hot desert climate, no less(!) — to be used for multiple purposes, including food preservation.

English servants store ice in underground rooms where it is flannel wrapped and packed with salt to keep it frozen until summertime.

The founder of Tudor Ice Company’s success in exporting ice from frozen New England ponds to hot countries all over the world makes him one of the richest Americans of his time and earns him the nickname 'Ice King.'

The Ice Boxes are Here

Americans are introduced to the early version of the refrigerator — the icebox — and they become common devices among the middle and upper class.

The first home refrigerators are considered a luxury for even the wealthiest Americans, then companies like Whirlpool introduce the single units which require less installation and maintenance.

Can I eat day-old food from my refrigerator?

Leftovers can stay in the refrigerator for three to four days, after which they must be thrown away, even if they don’t look or smell bad because the bacteria that spoils food does not typically alter the taste or smell, making it hard to discern spoilage.

Will food spoil at 50 degrees in the refrigerator?

Food spoils when the temperature goes above 40 degrees for longer than two hours. It is unsafe at 50 degrees.

What happens if you eat old refrigerated food?

Food poisoning is one of the most common side-effects of consuming spoiled or expired food.

How To Celebrate Haunted Refrigerator Night

Why We Love Haunted Refrigerator Night 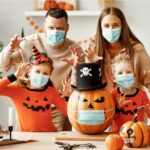