Bahrain National Day is on 16 and 17 December. That’s two designated days to celebrate the gem that is this island kingdom. In 1971, Bahrain acquired independence after a long era of British rule. It would be the beginning of a prosperous and peaceful chapter for Bahrain — a success story scripted for and by Bahrainis. Naturally, it’s a day that’s very close to every Bahraini’s heart. It is a public holiday when schools and virtually all businesses are closed.

The Kingdom of Bahrain is an island nation in the Persian Gulf. Bahrain comprises a beautiful archipelago of 50 natural islands and 33 artificial ones. Together with several other Arabian Gulf territories, the island was a British Protectorate in the 1960s. According to the Protectorate Treaty, the British would offer protection to Bahrain in the event of attacks by sea. The catch? Bahrain was forbidden to build international relations with any other nations without the consent of Britain. The agreement effectively allowed Britain indirect but near-absolute control over the island nation.

World War II brought sweeping changes to the global landscape, and Bahrain was no exception. Discontent over British rule had been simmering for a while but would soon tip over. Numerous protests took place. Conflict and riots became more commonplace. On August 15, 1971, the two countries finally signed an agreement that freed Bahrain from being a British Protectorate. Four months later, Britain left, and Bahrain became an independent country.

Isa Bin Salman Al Khalifa was Bahrain’s first emir and ascended the throne when the country gained independence. A king beloved by his people, he was responsible for introducing numerous reforms that transformed the economy and stability of the country. Bahrain rose to become the financial hub of the Arabian Gulf during the emir’s 38-year reign.

It’s no surprise why the people of Bahrain believe true independence came when the emir ascended the throne on December 16, 1971. Despite Britain officially handing over the reins much before in August, the emir’s rule meant Bahrain as a nation had symbolically come into its own. And the celebrations continue every December with fireworks, shows, and a range of cultural events.

The Beginnings of Revolution

Bahrain yearns for independence and self-determination.

An Island Under British Control

Bahrain receives protection from Britain as part of the Protectorate Treaty.

Britain calls back troops stationed east of the Suez.

How does Bahrain celebrate National Day?

What kind of country is the Kingdom of Bahrain?

The Kingdom of Bahrain is a Middle Eastern archipelago in the Persian Gulf, and a Western-friendly Muslim country.

Why is Bahrain important to the U.K.?

Bahrain is important to the U.K. because it is critical to the protection of Gulf shipping lanes, and with its religious mix, as well as its West-friendly stance, it is of strategic importance to its region, and to the U.K.

How To Celebrate Bahrain National Day

5 Facts About Manama That Will Blow Your Mind

Why We Love Bahrain National Day 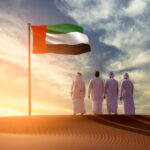