World Porridge Day is on October 10 and we’re super excited to explore the importance and significance of this day. Did you know that the first World Porridge Day coincided with the day an American, Mattew Cox, won the golden spurtle at the World Porridge Championship? What a great day for porridge lovers.

In the world of breakfasts, porridge reigns supreme as a delicious, simple food that can be enjoyed in several ways. Historically, porridge was a reliable staple for nutritional and health benefits in different parts of the world, including Europe and Africa. Porridge was also common in the Mediterranean area, Africa and Latin America.

Before the 1600s the word ‘porridge’ was not used but the practice of grinding and cooking cereals in milk or water existed. This simple dish has been a popular staple in Scotland since medieval times. Scotland boasts fertile marginal upland soils, which facilitate the successful growth of cereals such as oats and barley. Up until the 1700s, porridge was considered to be the food of people with a lower economic status. Today, around the world, porridge is loved because of its versatile recipes and outstanding nutrients that boost your immune system.

World Porridge Day is championed by Mary’s Meals, a charitable organization in the United Kingdom that feeds more than 1.6 million children in 19 countries around the world. The first World Porridge Day was held in 2009 and, since then, the day has been celebrated to raise awareness for starving children in less developed countries. By providing porridge to school children, Mary’s Meals hopes to give starving children the opportunity to get the education they duly deserve. Some of the successes recorded by the organization include improved school attendance and the elimination of absences attributed to hunger, reduced hunger among children at school, reduced levels of children dropping out of school, increased feelings of happiness at school, and decreased levels of anxiety due to hunger.

The Book of Oats

Oats are mentioned for the first time in literature.

The Rise of Oats

Oats are grown, cultivated, and consumed in Italy.

Scottish immigrants and settlers bring oats with them to America.

The beginning of a yummy celebration.

Porridge was first produced by hunter-gatherers in Southern Italy but became commonplace towards the end of the Stone Age.

Is porridge the same as oatmeal?

Oatmeal is a type of porridge. Porridge is a hot meal made from grains and vegetables.

Why is porridge popular in Scotland?

Oats have been a staple food in Scotland since medieval times. Climate conditions promoted the growth of crops such as oats, leading to its popularity among Scottish nationals.

Why We Love World Porridge Day 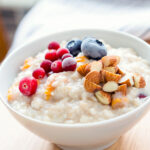 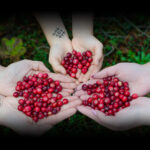